"This series is for the whole of Pakistan. It's waited a long time and seen a lot of pain and heartache. It's a celebration for our nation."

As Test cricket returns to the country for the first time in a decade, Pakistan Cricket Board (PCB) chief executive Wasim Khan is hopeful the series against Sri Lanka will reignite fans' love for the sport.

"This is such a momentous moment," Khan told BBC Sport. "It really is like a religion over here."

The first Test of the two-match series, which forms part of the International Cricket Council's (ICC) World Test Championship, begins on Wednesday in Rawalpindi.

Pakistan have not played a Test on home soil since the Sri Lanka team bus was ambushed by gunmen in Lahore on 3 March 2009, when six policemen and two civilians died and several Sri Lanka players and coaches were injured.

There will be a strong security presence in Rawalpindi, in the north of Pakistan, this week with armed police patrolling the stadium.

'A lost generation' of Pakistan fans

With international teams opting not to tour because of security fears, Pakistan have played the majority of their "home" matches since 2009 in the United Arab Emirates, often in front of sparse crowds.

Khan says this has resulted in a "lost generation" of cricket fans.

"I mean that in terms of both participation and those supporters who have become distant because they couldn't just go along and watch their heroes," he said.

Pakistan hosted Zimbabwe for three one-day-internationals in 2015, although the series was marred by a suicide bombing outside the stadium.

"The losses we've made probably goes into the hundreds of millions [of dollars]," suggests Khan, who says the return of Test cricket is "critical".

Pakistan will be led by captain Azhar Ali against Sri Lanka. Azhar, who made his debut in 2010, has played 75 Tests but none in Pakistan.

"Having the likes of Azhar play at home, in front of their fans in rocking stadiums with thousands watching, will only drive the players on to bigger and better things," Khan said. 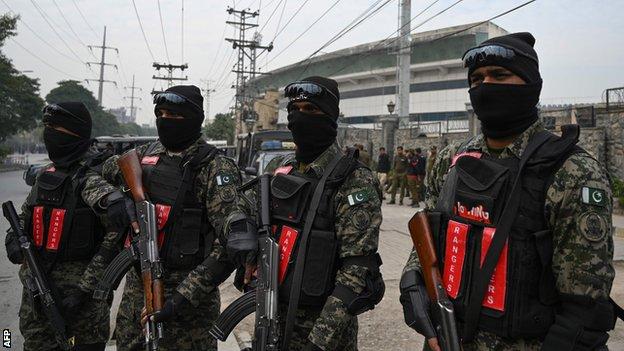 'There will be a buzz in Rawalpindi'

Khan says there is "a huge buzz" for the game at the Pindi Cricket Stadium, which last hosted a Test in 2004.

"We want local fans to come and watch Test cricket for the first time," Khan said.

Former Pakistan seamer Yasir Arafat, who played in the abandoned 2009 Lahore Test and has a stand in Rawalpindi named after him, says there will be a "festival-like" atmosphere at the ground.

He added: "You get a special feeling playing in your own country."

When will England tour Pakistan?

England have not toured Pakistan since 2005 and are not scheduled to return until 2022.

England and Wales Cricket Board chief executive Tom Harrison visited Pakistan in October to review security, and Khan is confident the series will go ahead.

"We're taking baby steps towards building a relationship and confidence in them," he said.

Khan acknowledges that the lack of bilateral cricket against neighbours and fierce rivals India has also been costly to the PCB.

"They have to get permission from their government before they play us in a bilateral series," he said.

The two sides have not played a Test since December 2007, while since January 2013, their only meetings in limited-overs internationals have been at ICC global events. 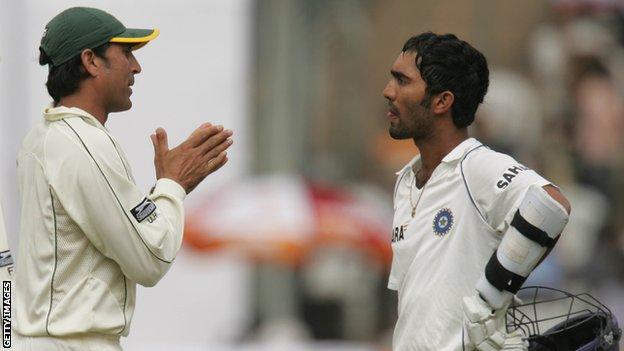 Pakistan's Younuis Khan and Dinesh Karthik of India talk during a match in Bangalore in December 2007, the most recent Test between the sides

The success of the Pakistan Super League T20 competition in recent years has shown that players do not need to worry about security concerns, according to Khan.

He said: "Shane Watson, who is now the president of the Australia Players' Cricket Association, recently said Pakistan is one of the safest places to play cricket in the world."

The draft for next year's PSL - which runs from 20 February to 22 March - was held last week, with 14 English players, including Jason Roy and Moeen Ali, selected.

Khan, a former county cricketer who was chief executive of Leicestershire before taking the PCB job, is relying on the "word of mouth" of these players to share their experiences with others.

His message to them is simple. "Go home and tell your countrymen that it's safe, go to Pakistan and play in front of those passionate fans."

A young Pakistan team who can 'become cult heroes'

Pakistan have won six, drawn three and lost two of the series they played in the UAE since 2009.

They rose to number one in the ICC Test rankings in 2016, but have slipped to eighth and have just suffered a 2-0 series defeat in Australia.

There are promising signs for a young team. In Australia, Pakistan became the first side in Test history to field three players under the age of 20 with the pace bowling trio of Naseem Shah, Muhammad Musa and Shaheen Afridi. 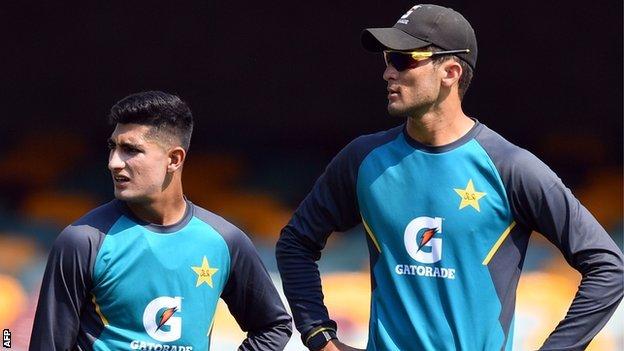 Naseem Shah, 16, and Shaheen Afridi, 29, are in Pakistan's Test squad for the two-Test series against Sri Lanka

Head coach Misbah-ul-Haq also has Babar Azam at his disposal - a player who is top of the T20 world batting rankings and third in the ODI standings.

"We've got a huge amount of ability in this side. These are players who will be here to stay for a very long time. I have absolute faith they will become cult heroes for this country," Khan added.

Sri Lanka have not played Test cricket since drawing 1-1 at home to New Zealand in August, but have sent a strong squad to Pakistan.

It will be coach Mickey Arthur's first outing in charge of a team captained by Dimuth Karunaratne and including the experienced Angelo Mathews and Dinesh Chandimal.

Injured Yates up to fourth at Tour Down Under

PSG do not lack respect for Cavani - Tuchel

Conditions like 'smoking 80 cigarettes a day'
Previous Item
NEXT