Hong Kong stocks have fallen again as another day of anti-government protests cast a shadow over the city and rattled investors.

It comes amid more clashes between protesters and police, and the partial closure of the transport network.

This week has seen a marked escalation in violence with intense street battles, violent clashes at universities and flashmob lunchtime protests in the financial heart of Hong Kong.

The protests have dealt a blow to the local economy and Hong Kong recently tipped into recession. Tourism and retail businesses have been among those hardest hit as travellers stay away.

Fresh lunchtime protests in the financial district saw crowds gather to chant slogans. Some black-clad protesters also vandalised a branch of the mainland Bank of Communications. 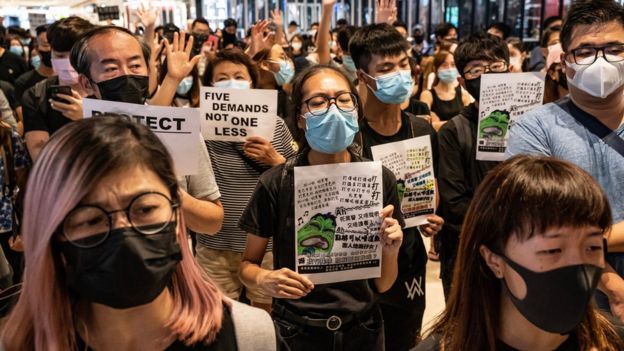 Why are there protests in Hong Kong?

Hong Kong is part of China, but as a former British colony it has some autonomy and people have more rights.

The protests started in June against plans to allow extradition to the mainland - which many feared would erode the city's freedoms.

The bill was withdrawn in September but demonstrations continued and now call for full democracy and an inquiry into police behaviour.

Clashes between police and activists have become increasingly violent and in October the city banned all face masks.