Why the age of electric flight is finally upon us

Eviation's nine-seater electric aircraft, Alice, was a hit at the Paris Airshow

Aerospace firms are joining forces to tackle their industry's growing contribution to greenhouse gas emissions, with electric engines seen as one solution. But will this be enough to offset the growing demand for air travel?

This week's Paris Airshow saw the launch of the world's first commercial all-electric passenger aircraft - albeit in prototype form.

Alice is an unconventional-looking craft: powered by three rear-facing pusher-propellers, one in the tail and two counter-rotating props at the wingtips to counter the effects of drag. It also has a flat lower fuselage to aid lift.

"This plane looks like this not because we wanted to build a cool plane, but because it is electric," says Eviation's chief executive Omer Bar-Yohay.

"You build a craft around your propulsion system. Electric means we can have lightweight motors; it allows us to open up the design space."

Eviation has already received its first orders. US regional airline Cape Air, which operates a fleet of 90 aircraft, has agreed to buy a "double-digit" number of the aircraft.

The firm is using Siemens and magniX to provide the electric motors, and magniX chief executive Roei Ganzarski says that with two billion air tickets sold each year for flights of under 500 miles, the business potential for small electric passenger aircraft is clear.

Crucially, electricity is much cheaper than conventional fuel.

A small aircraft, like a turbo-prop Cessna Caravan, will use $400 on conventional fuel for a 100-mile flight, says Mr Ganzarski. But with electricity "it'll be between $8-$12, which means much lower costs per flight-hour".

"We're not an environmentalist company, the reason we're doing this is because it makes business sense." 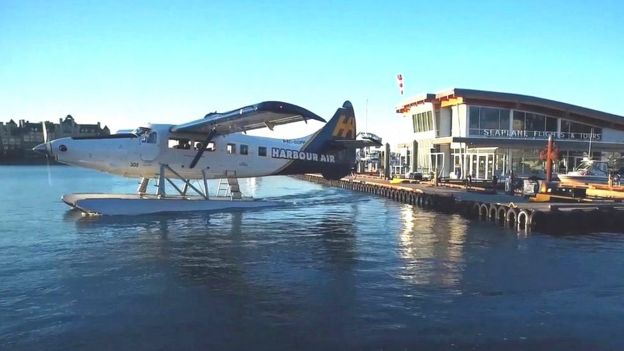 The future also looks reasonably bright when it comes to medium-range flight - a range of up to about 1,500km.

Unlike Alice, aircraft targeting this range would use a mix of conventional and electric power, enabling them to cut CO2 emissions significantly by switching on the electrical component of their propulsion at the key points in a flight - take-off and landing. 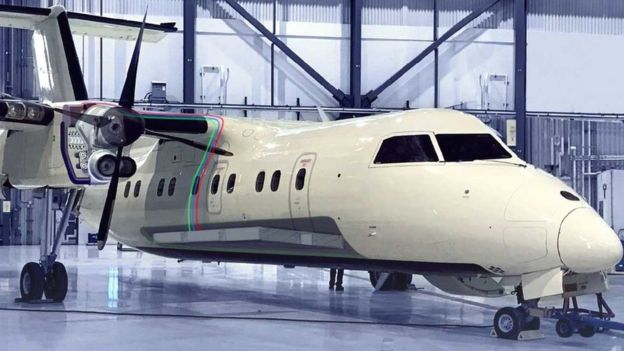 Airbus, Rolls-Royce and Siemens are co-operating on an electric-hybrid aeroplane called the E-Fan X

For example, Rolls-Royce, Airbus and Siemens are working on the E-Fan X programme, which will have a two megawatt (2MW) electric motor mounted on a BAE 146 jet. It is set to fly in 2021.

"There are huge amounts of energy involved here, the engineering is absolutely leading-edge - and our investment in electrification is ramping up rapidly," says Rolls-Royce's chief technology officer Paul Stein.

United Technologies, which includes engine-maker Pratt & Whitney in its portfolio, is working on its Project 804, a hybrid electric demonstrator designed to test a 1MW motor and the sub-systems and components required.

The firm says it should provide fuel savings of at least 30%. It should fly in 2022 and is forecast to be ready for regional airliners by the mid-2020s.

Is United Technologies' hybrid-electric demonstrator plane the shape of things to come?

Zunum Aero, backed by Boeing, is using a engine turbine from France's Safran to power an electric motor for a hybrid craft. And low-cost airline EasyJet is working with Wright Electric, saying it will start using electric aircraft in its regular services by 2027. This is likely to be on short-haul flights, such as London to Amsterdam - Europe's second busiest route.

"Electric flying is becoming a reality and we can now foresee a future that is not exclusively dependent on jet fuel," says EasyJet chief executive Johan Lundgren.

It's a statement underscored by a report from investment bank UBS which predicts the aviation sector will quickly switch to hybrid and electric aircraft for regional travel, with an eventual demand for 550 hybrid airliners each year between 2028 and 2040.

But the prospects for electric long-haul flights are not so rosy. 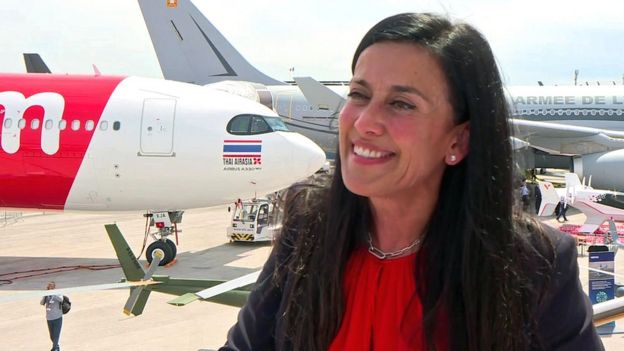 Even assuming huge advances in battery technology, with batteries that are 30 times more efficient and "energy-dense" than they are today, it would only be possible to fly an A320 airliner for a fifth of its range with just half of its payload, says Airbus's chief technology officer Grazia Vittadini.

"Unless there is some radical, yet-to-be invented paradigm shift in energy storage, we are going to rely on hydrocarbon fuels for the foreseeable future," says Greg Eremenko, United Technologies chief technology officer.

The big problem with this is that 80% of the aviation industry's emissions come from passenger flights longer than 1,500km - a distance no electric airliner could yet fly.

Yet the UK has become the first G7 country to accept the goal of net zero carbon emissions by 2050 - a huge challenge for the air travel business with 4.3 billion of us flying this year and eight billion expected to do so by 2037.

Regulators are also piling on the pressure.

In Europe, the European Aviation Safety Agency says it will start categorizing aircraft based on their CO2 emissions, while Norway and Sweden are aiming to make short-haul flights in their airspace electric by 2040.

So logically, is the only answer is to ditch long-haul flights?

This obviously isn't an appealing prospect for the industry. Rolls-Royce's Paul Stein says starkly that the world would be in a "dark place" if we stopped travelling.

He argues that in a global economy "where peaceful co-existence comes about from travelling and understanding each other, if we move away from that I am very concerned it's not the direction mankind should be going in".

GRA signs pact with The Netherlands

AFM to connect projects and financiers

Ghana to lead charge to recapitalize AfDB
Next Item