Bank of Scotland has been fined £45.5m for failing to alert authorities to early indications of a fraud which ended with the jailing of six people.

The fine relates to activity in 2007 by Lynden Scourfield, the head of the bank's Impaired Assets team in 2007.

The Financial Conduct Authority (FCA) said the bank knew he had been sanctioning lending beyond his authority, but failed to act properly.

In February 2017, Scourfield was sentenced to 11 years in jail.

Five other individuals were also jailed for their part in a fraud, in which funds were diverted and spent on luxury holidays and prostitutes.

The FCA said that, despite being aware of Scourfield's activities, full information was not provided to regulators until July 2009.

"There is also no evidence anyone realised, or even thought about, the consequences of not informing the authorities, including how that might delay proper scrutiny of the misconduct and prejudice the interests of justice," the FCA said in a statement.

"There was insufficient challenge, scrutiny or inquiry across the organisation and from top to bottom," it said.

The police investigation found that the six individuals siphoned off funds and spent the profits on prostitutes, luxury holidays and a range of expensive items. 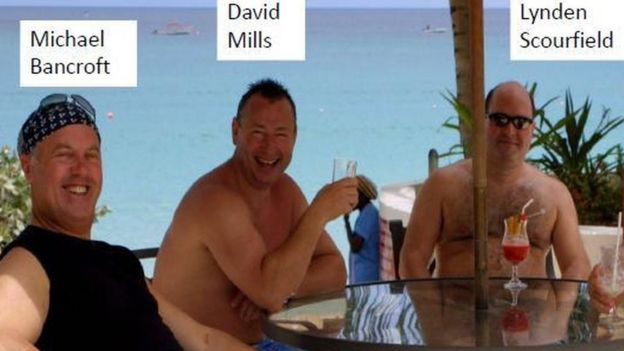 At the time of their sentencing in 2017, Judge Martin Beddoe said Scourfield "sold his soul" in exchange for "sex", "bling" and "for swag".

Consultant David Mills was jailed for 15 years; Michael Bancroft was jailed for 10 years; Mark Dobson, another former HBOS manager, was sentenced to four and a half years.

Alison Mills and John Cartwright were given three and a half year sentences for money laundering.

In exchange for bribes, Scourfield told customers to use a turnaround firm called Quayside Corporate Services.

These were given in exchange for loans which allowed Mills and his associates to charge high consultancy fees.

Many of the businesses were perfectly sound and had no need of help, but were told their relationship with their bank would be in jeopardy if they did not agree to use Quayside.

HBOS, once Britain's biggest mortgage lender under the Halifax and Bank of Scotland brands, was forced to write off £245m related to the conspiracy.

"If BOS had communicated its suspicions to the FSA in May 2007, as it should have done, the criminal misconduct could have been identified much earlier. The delay also risked prejudice to the criminal investigation conducted by Thames Valley Police," the FCA said.

Occidental in talks to sell US4.5 bn asset

Adidas expects to bounce back soon

What COVID means for UK’s economy

The 'chaos' that nearly derailed Hornby
Previous Item
NEXT

The age of electric flight is upon us
Next Item