Asos sells a black dress a second on Black Friday

Asos sold one black dress every second and one wedding dress every minute during record trade on Black Friday last year.

That helped sales at the online fashion retailer jump 20% to £1.1bn in the last four months of 2019.

Asos shares surged 12% on the signs of a turnaround at the firm, which was hit by supply problems last year.

Chief executive Nick Beighton said the performance was "encouraging" but there was "more work to be done".

Last July, the company issued a profit warning after problems at its US and European warehouses meant that some stock was unavailable to customers. 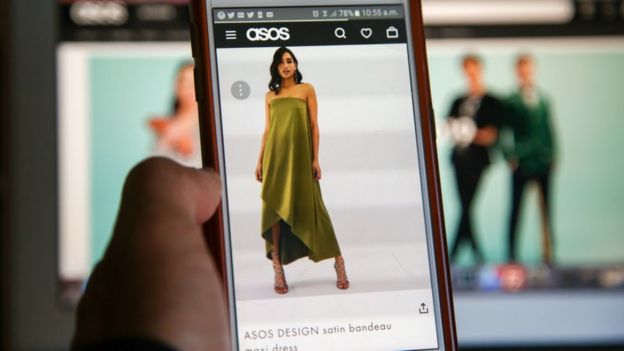 Best sellers such as branded sneakers, overcoats and puffer jackets, as well as staples such as denim, jumpers and organic cotton T-shirts, helped to drive sales over the period.

"Asos made it through the festive season without signalling a distress call. Not only that but sales were better than expected, which will come as a pleasant surprise," said Sophie Lund-Yates, equity analyst at Hargreaves Lansdown.

"We think Asos is focusing on the right things, but many investors will just be relieved the group's been able to deliver a strong quarter."

The company said it had made a significant investment in trying to gain more customers in the US and EU.

While UK sales rose 18% over the four-month period, sales in the EU climbed 21% and were 23% higher in the US.

"International sales now account for 62% of group retail revenue and it looks like enhancing its US and EU warehousing capabilities is starting to pay off despite the troubles it caused," said Emily Salter, a retail analyst at GlobalData.

ACV appeals for removal of barriers

Outlook for GSE this year positive

850 women with disability benefit from PEF