Cyber-security: Push for girls to look at careers in the industry

Pupils at Ysgol Bro Edern, Cardiff, are learning about the potential of cyber-security as a career

The cyber-security sector in Wales will lose out unless more girls are inspired to join it, an expert has warned.

It comes as IT company CGI officially opens its new centre in Bridgend, with plans to employ 100 analysts.

There are already 3,500 cyber-security jobs in Wales, with aims for it to be a hub for the UK.

Clare Johnson, of the University of South Wales, said girls approached problems in different ways to boys and both were important for the industry.

There are also new attempts to encourage more girls to think of it as a career. 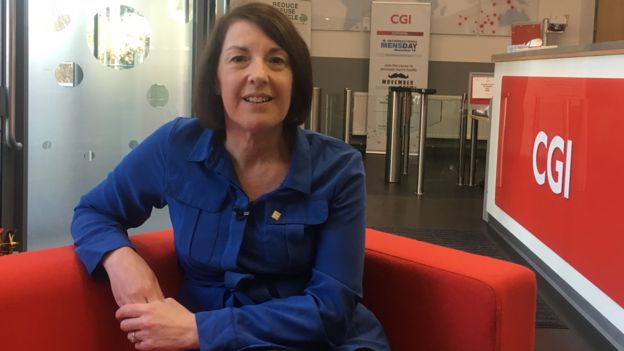 Maxine Bulmer, director of cyber security at CGI said they were building up from a small team already here

CGI already employs 1,200 workers at three different sites in Bridgend and has a cyber-security centre in Reading, employing more than 200.

Maxine Bulmer, director of cyber security at CGI, said around 100 staff would be acting a bit like cyber detectives, watching what was going on - and investigating incidents when they happen and learning from them.

"It's about being aware of what things are happening, where those attacks might be coming from and who's trying to attack them," she said.

"The threat over the last few years has really changed from someone on the street trying to break in and take pieces of kit to now, who knows where the threat comes from."

Ms Bulmer said the company had seen an increase in interest in careers from girls - but she said it was important to engage them when they were young.

Only 30% of those taking ICT at GCSE in Wales are girls.

This lack of diversity has been recognised by those in the industry.

Now there is a push to inspire girls in Wales to think of cyber-security as a career.

In Cardiff, a competition was launched for girls at Ysgol Bro Edern.

Pupils are already learning coding and are now getting a taste of what cyber-security is about.

Elin, 12, said: "I'd like to use my skills to [deal with] viruses online and stuff that can wipe out computers, and also encrypting codes, which I think is really helpful.

Angharad, 13, who would also consider it as a career, added: "There's so much fun you can have on the internet, I'd like to make it safer, instead of being targeted by people." 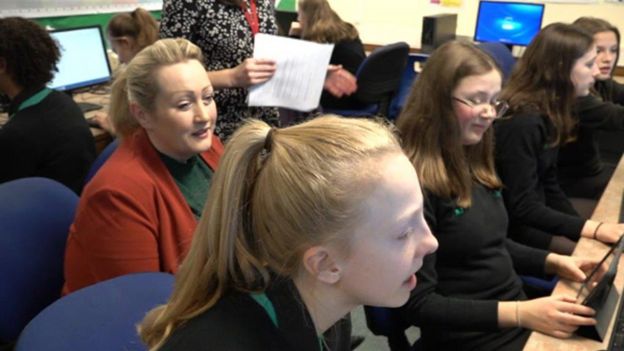 Rebecca Evans at the launch of CyberFirst Girls, a competition aimed at encouraging more girls into cyber security careers

Ms Johnson, the head of cyber-security at the University of South Wales, said she believed talent has been lost because it has been seen as a very male-dominated industry, but she wants it to be more diverse.

"Often when I'm in meetings, I'm the only female in the room and I think that can put girls off," she said.

"Yet the addition of a different mindset and way of approaching some of the really complex problems we're facing, it's essential to have girls in the industry."

Newport is also hosting the CyberUK 2020 conference, next May.

"Cyber-security is the fastest growing tech sector we have in Wales at the moment and we think it's an area we're really excelling in and we're focusing on growing that sector," she said.

How do we connect a child to technology?

71 per cent of data centers not prepared