Mobile roaming: What will happen to charges after Brexit?

In June 2017 the European Union scrapped additional charges for roaming on smartphones when you travel to another EU country.

Roaming is when you use your mobile phone abroad. Since 2017, UK consumers have, within reason, been able to use the minutes, texts and data included on their mobile phone tariffs when travelling in the EU. The same is true for consumers from other EU countries visiting the UK.

There are fair use limits, which mean you can use your mobile phone while travelling in another EU country, but you could not, for example, get a mobile phone contract from Greece and then use it all year round in the UK.

Before the rules changed, using a mobile phone in Europe was expensive, with cases of people returning from trips to find bills for hundreds or even thousands of pounds waiting for them.

Will these charges return after Brexit?

If the UK leaves the EU having agreed a withdrawal agreement that includes a transition period any changes will not happen immediately.

Virtually all EU rules and regulations, including on mobile roaming anywhere in the EU, will continue to apply until the end of the transition period. Under Theresa May's deal, that would have ended on 31 December 2020, with options to extend it for one or two years.

What happens after that would depend on what is agreed about the UK's future economic relationship with the EU, which could include the abolition of, or limits to, mobile roaming charges.. 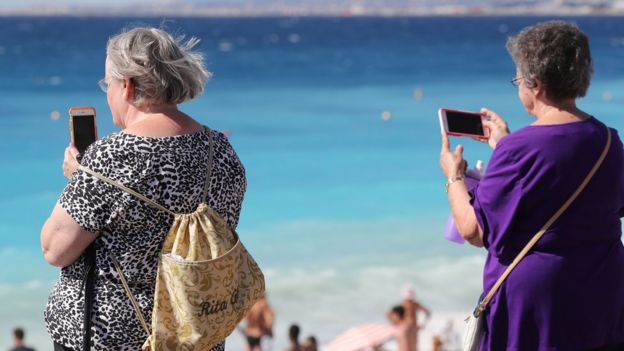 If the UK leaves without a deal, the government's advice is that mobile operators would be able to implement roaming charges if they wanted to.

But in the event of a no-deal Brexit, UK law would automatically put a £45-a-month limit on the amount that customers could be charged for using mobile data abroad before having to opt into further use.

There would also be requirements for customers to be informed when they have reached 80% and 100% of their data allowances.

And there would be requirements for operators to take "reasonable steps" to avoid customers being charged for accidental roaming in Northern Ireland, which would happen if a phone in Northern Ireland locked onto the mobile signal coming from the Republic of Ireland.

Of course, just because the operators might be allowed to reintroduce roaming charges, it does not necessarily mean that they will do so.

Three has no plans to bring them back in, regardless of how Brexit negotiations turn out.

Vodafone said it currently had no plans to change its roaming charges because of Brexit.

EE said: "Our customers enjoy inclusive roaming in Europe, and we don't have any plans to change this based on the Brexit outcome."

And O2 said: "We currently have no plans to change our roaming services across Europe. We will be working closely with the government and other European operators to try and protect the current arrangements, so our customers can continue to enjoy free EU roaming once Britain officially leaves the EU."