An Uber and Lyft driver who broadcast videos of his passengers online has been suspended from both car-sharing services.

Jason Gargac live-streamed passengers' journeys on video-sharing site Twitch, where viewers would comment on their behaviour and appearance.

His Twitch channel has been suspended. 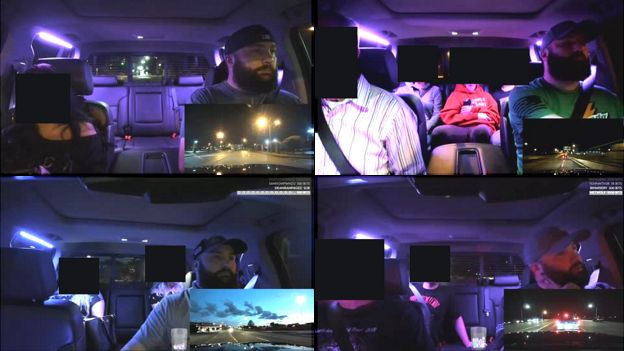 Passengers did not always know they were being recorded

Mr Gargac worked as a part-time Uber and Lyft driver in the St Louis area of Missouri, USA.

According to the St. Louis Post-Dispatch, passengers did not always know he was live-streaming their journey from a camera mounted on the windscreen.

The practice is not typically illegal in Missouri as long as one party - in this case Mr Gargac - has given consent for the recording to take place.

However, there are additional rules about broadcasting footage where a person might have a "reasonable expectation of privacy".

Many viewers of Mr Gargac's videos left derogatory comments on the videos, rating passengers for their attractiveness.

"The blonde is a seven, the brunette a five," one wrote. "She doesn't sit like a lady," another added.

Some of the videos also revealed passengers' names and addresses.

Following questions from the newspaper, Uber said it had suspended Mr Gargac.

"The troubling behaviour in the videos is not in line with our community guidelines," it said in a statement.

"The driver's access to the app has been removed while we evaluate his partnership with Uber."

Mr Gargac told the newspaper he had made changes to offer passengers more privacy, including switching off the street-facing camera when approaching passengers' homes.

Some conversations and visuals were also blocked from his livestream.