Artificial intelligence can be weapon in cancer fight, PM to say

The diagnosis of cancer and other diseases in the UK can be transformed by using artificial intelligence, Theresa May is to say.

The NHS and technology companies should use AI as a "new weapon" in research, the PM will urge in a speech later.

Experts say it can be used to help prevent 22,000 cancer deaths a year by 2033 while aiding the fight against heart disease, diabetes and dementia.

High-skilled science jobs will also be created, Mrs May is to pledge.

Speaking in Macclesfield, Mrs May will say: "Late diagnosis of otherwise treatable illnesses is one of the biggest causes of avoidable deaths.

"And the development of smart technologies to analyse great quantities of data quickly and with a higher degree of accuracy than is possible by human beings opens up a whole new field of medical research."

BBC health and science correspondent James Gallagher says Mrs May's plans do chime with excitement within medical science about the potential of using data and AI.

But our correspondent added there are many challenges ahead including creating the right infrastructure within the health service, separating hype and genuine innovation and ensuring the public's highly personal data is used responsibly.

Cancer Research UK says halving the number of lung, bowel, prostate and ovarian cancers diagnosed at an advanced stage could prevent thousands of deaths a year. 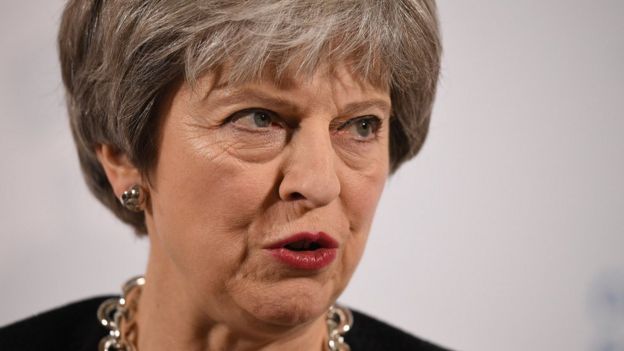 Sir Harpal Kumar, chief executive officer of Cancer Research, described the government's plans as pioneering but added: "We need to ensure we have the right infrastructure, embedded in our health system, to make this possible."

"This could lead to a quicker diagnosis with more personalised treatment that could ultimately save lives."

Mrs May will also use her speech to announce a new target to ensure that five more years of people's lives will be healthy, independent and active by 2035.