Uber has been forbidden from resuming self-driving tests in the US state of Arizona.

The car-hailing company had already halted its trial after one of the vehicles involved struck and killed a pedestrian a week ago.

The state's governor wrote to the firm on Monday saying there had been an "unquestionable failure" to make safety the top priority.

Uber said it would help investigators "in any way we can".

Governor Doug Ducey referenced a video released of the incident within his letter.

It shows the car's operator looking down, rather than directly at the road, for about five seconds before the night-time accident.

"I found the video to be disturbing and alarming, and it raises many questions about the ability of Uber to continue testing in Arizona," wrote Mr Ducey.

He added that he had ordered officials to suspend the firm's right to drive autonomous vehicles on local roads pending the outcome of inquiries by national transport safety regulators.

The governor's tone contrasts with a statement given in 2016, when Mr Ducey said he welcomed the company's self-driving fleet "with open arms and wide open roads".

Uber launched its experiments in the state after being ordered to halt tests in San Francisco because it had failed to obtain a required permit. 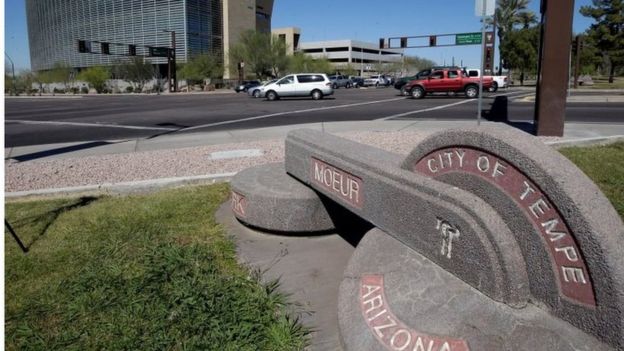 In a related development, the chief of Intel's rival self-driving programme suggested its Mobileye tech would have prevented the accident.

"We ran our software on a video feed coming from a TV monitor running the police video of the incident," blogged Amnon Shashua.

"Despite the suboptimal conditions, where much of the... data that would be present in the actual scene was likely lost, clear detection was achieved approximately one second before impact."

The Bloomberg news agency has reported that the Volvo cars used by Uber feature Mobileye chips and sensors, but their normal driver assistance system was disabled, according to the auto-parts' supplier.

The head of Google's autonomous car division Waymo has also said its tech would have been "able to handle" such situations.

Velodyne - the firm that designed the collision-avoidance sensors that Uber employs - previously told the BBC that it was "baffled" by the accident because its equipment was capable of seeing in the dark.

Zuckerberg will not appear before MPs
Previous Item
NEXT