Data row: Facebook's Zuckerberg will not appear before MPs

Mark Zuckerberg apologised for a "breach of trust"

Facebook boss Mark Zuckerberg's decision not to appear before MPs is "astonishing", said the committee chairman who invited him to attend.

Facebook and data analytics firm Cambridge Analytica are at the centre of a row over harvesting personal data.

Mr Zuckerberg has apologised for a "breach of trust", but said he will not appear in front of the inquiry.

He will instead send one of his senior executives, Facebook's chief product officer Chris Cox, who will give evidence to MPs in the first week after the Easter parliamentary break.

But Mr Collins, the chairman of the Department for Culture Media and Sport select committee, said: "Given the extraordinary evidence that we've heard so far today... it is absolutely astonishing that Mark Zuckerberg is not prepared to submit himself to questioning.

"These are questions of a fundamental importance and concern to Facebook users, as well as to our inquiry as well.

"I would certainly urge him to think again if he has any care for people that use his company's services."

The select committee has heard from whistleblower and former Cambridge Analytica employee Christopher Wylie, who claimed the UK may not have voted for Brexit had it not been for "cheating" by the Leave campaign.

Mr Wylie told the committee that Canadian company AggregateIQ, which he said was closely linked to the Vote Leave campaign and received funding from it, played a "very significant role" in the referendum result.

The whistleblower has accused Cambridge Analytica of gathering the details of 50 million users on Facebook through a personality quiz in 2014.

He alleges that because 270,000 people took the quiz, the data of some 50 million users, mainly in the US, was harvested without their explicit consent via their friend networks.

Mr Wylie claims the data was sold to Cambridge Analytica, which then used it to psychologically profile people and deliver pro-Donald Trump material to them to assist the presidential election campaign.

In evidence, Mr Wylie was asked whether his main concern was with the use of military-inspired psychological operations in politics, he replied that was "part of it" but he had broader concerns.

Cambridge Analytica or SCL (CA's parent company) "don't care whether what they do is legal" as long as they "get the job done", he said.

He also criticised the company for running campaigns in struggling democracies, which he called "an example of what modern-day colonialism looks like".

"You have a wealthy company from a developed nation going into an economy or democracy that's still struggling to get its feet on the ground - and taking advantage of that to profit from that," he told MPs.

Earlier, he described his former boss, the company's CEO Alexander Nix, as a salesman with no background in politics or technology but a lot of wealth.

On one occasion, the two of them were running late because Mr Nix had to "pick up a £200,000 chandelier", MPs heard.

Mr Wylie went on to say that Mr Nix's standard sales pitch was to play on his Eton public school education and Mayfair offices to present a "posh veneer". 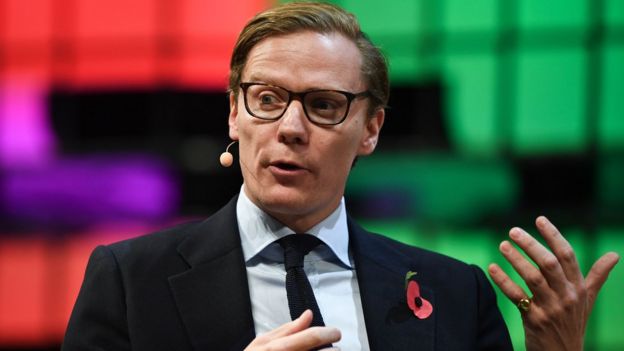 He said Mr Nix had been "dishonest" with the committee at a hearing in February when he denied using Facebook data.

"Facebook data and the acquisition using Aleksandr Kogan's data-set (through the personality test) was the foundation of the company," he said.

"That is how the algorithms were developed. They spent one million dollars at least on the acquisition of that data-set."

Steve Bannon, Donald Trump's former chief strategist and a director on Cambridge Analytica's board, did not care about creating that impression, said Mr Wylie.

He was more interested in speaking at university events than sitting in posh offices so Mr Nix set up a fake office in Cambridge to present a more academic side of the company, Mr Wylie said.

After that, Mr Bannon decided to call the company Cambridge Analytica, he said.

"In his head, it was a very academic company," he added.

As a whistleblower, Mr Wylie said the greatest "legal pushback" was not from Cambridge Analytica, but Facebook.

"They're most upset by this story," he said, and have sent some "fairly intimidating legal correspondence" although have not acted on it.

He said his motivation for going public was to bring down Cambridge Analytica and SCL, from which "nothing good" had come.

Data protection specialist Paul-Olivier Dehaye also told the panel he had written to the Information Commissioner's Office in August 2016 "asking them if they were investigating Cambridge Analytica".

In a tweet, Cambridge Analytica said it was "sad" to see the "very gifted" Mr Wylie leave in July 2014 after 11 months with the company.

"We took legal action purely to stop him from pitching identical services to our clients."

It added that Mr Wylie was a part-time contractor with "no direct knowledge of our work practices" since leaving in 2014.

Cambridge Analytica denies any of the data acquired was used as part of the services it provided to the Trump campaign.

MPs have written to Mr Nix, currently suspended from Cambridge Analytica, to ask him to return before the committee after his previous appearance in February.

Over the weekend, Mr Zuckerberg took out full-page advertisements in several UK and US Sunday newspapers to apologise.

He said his company could have done more to stop millions of users having their data exploited by Cambridge Analytica.

"This was a breach of trust, and I am sorry," the back-page ads said.

'Streaming services are too similar'
Previous Item
NEXT