Ralf Rangnick: What can Man Utd expect from the German manager?

Ralf Rangnick is set to be appointed as interim Manchester United manager until the end of this season.

He will succeed Ole Gunnar Solskjaer, who left the club this month, and after his initial six-month spell in charge, the German will take on a consultancy role with the club for two further years.

But what attracted United to Rangnick and vice versa? What kind of manager is he? Is he likely to be a success and what will his role beyond this season entail?

And what will his appointment mean for Cristiano Ronaldo?

To answer these questions, the BBC spoke to St. Louis SC sporting director Lutz Pfannenstiel, who worked with Rangnick at Hoffenheim, former Leicester defender Christian Fuchs - who played under him at Schalke - and European football journalists Raphael Honigstein, Guillem Balague and Julien Laurens.

'The best man on the market'

Rangnick's appointment comes at the end of a thorough recruitment process conducted by United, who were impressed during an initial conversation with the German earlier this week.

The 63-year-old has built an impressive coaching reputation during his time in Germany, chiefly through spells at Stuttgart, Hannover, Hoffenheim, Schalke and RB Leipzig.

He would be joining a club that are eighth in the Premier League, having lost their way under Solskjaer, whose final match was a 4-1 humbling at Watford and their fourth defeat in five league games.

Honigstein: He had a similar offer of an interim job from Chelsea not that long ago and he said 'no, that's not for me'. In this case there are three different things.

Firstly, it is Manchester United and that still has a special ring to it. There is a romance, especially for an anglophile like Rangnick, who studied and lived in England and loves the Premier League.

Secondly, it is six months. It is more than two thirds of the season with a lot of football still to be played.

Thirdly, United have effectively said to him 'we might only want you as a short-term manager, but we want to tap into your football knowledge beyond that'. This comes at a time when the structure at United is changing a bit, with a new chief executive coming in and an openness to bringing in more football expertise from outside.

We all look at what Thomas Tuchel has done in an even shorter space of time at Chelsea. He has no experience of English football, comes in January and, just by giving a team that was completely rudderless some structure, he goes on to win the Champions League.

I think United will have thought 'can we get a Tuchel-type guy to give us an immediate lift, immediate structure?'. The team is better than their current results and performances.

Pfannenstiel: Ralf is a big expert, really one of the best coaches or managers Germany produced in the past 15-20 years, I would say.

Everything he did so far was successful and he always was very clear that if he gets the opportunity to work for a big club in England, he wants to do that.

So, looking at this interim head coach, I think he is the one who really can get everything stabilised to really get United back on track. I think he probably was the best man on the market.

Laurens: I'm gobsmacked and I'm still not sure. He's one of the greatest thinkers in football in the past 20 years and inspired all the great German coaches.

But he's a builder, that's what he does and you don't do that in six months.

For a quick fix, I wouldn't put him in that role. He will give his opinions on players and methods, but will not be able to interfere like he did at Leipzig. I was a bit surprised. I can see why he took that job - you can't say no to United whoever you are.

He knows English football but has not managed or played here before.

Rangnick's trophy haul as a manager is modest, but his influence on the game is vast, not only as a coach and director of football but as a thinker on the game.

His biggest achievements have been in building sides from the bottom up - most notably at Hoffenheim and RB Leipzig.

He is often cited as the originator of the modern pressing game, with Tuchel, Julian Nagelsmann, Ralph Hasenhuttl and Jurgen Klopp among those he has influenced.

If you look back at how Hoffenheim played, especially how RB Leipzig played, I think this is what you can expect - some really, really high push-up football where they are pressing and stressing the opponent, forcing the opponent to make mistakes.

He is very clear, very direct and most importantly everything he does is with a clear goal. He is not a guy who jokes around all day. He wants things to get done - that's the way he will approach that. Ralf was always successful - and I believe he always will be successful because he is as intense as his football will be on the field. He expects a lot from the players, but he also expects a lot from himself.

I think it really fits well to the players Manchester United have and to the style the fans love to see at Old Trafford. I think Ralf could be the next German who really puts his stamp and his legacy on a club's future.

Fuchs: He has a very clear philosophy of how he wants to play, the idea of coaching and pressing - and that will never change.

He is looking to have a personal interaction with you. I was in Vienna with the Austria national team, we had a couple of beers and were talking for a long time about the philosophy of Hoffenheim.

But then he said 'at the moment, you're not the player for me'.

He was very up front, very straightforward and that's what I appreciated. Two years later he said 'I want to sign you now'.

He thought I was not ready, but that's all credit to him for being very straightforward and very realistic. He said 'keep playing, keep learning' and two years later he said 'now, you are ready'.

It is the little things - the positioning, when to push forward and all of those things that can impact your game massively. Under him I came to Schalke, a big club and expectations were high right away, but he made me feel comfortable and appreciated. This kind of man-management is very important in the game.

He knows what he wants and he will demand from these players to stick together and work hard together. 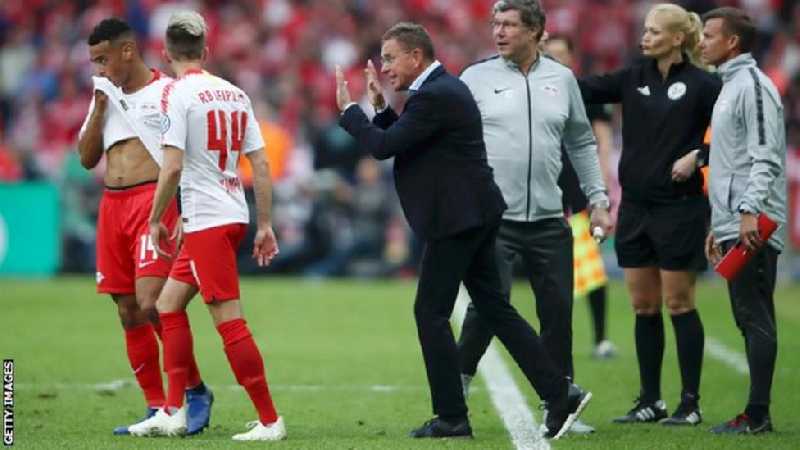 It is hoped Rangnick will take over at United after this weekend's Chelsea game, for which Michael Carrick will remain in charge

United will be the first truly elite European club that Rangnick will have managed.

He joins them after a summer of investment during which they added a number of high-profile players to a squad already loaded with internationals carrying big reputations, the most notable being five-time Ballon d'Or winner Cristiano Ronaldo.

Honigstein: He has always been nice handling people, but some people cannot handle someone wanting you to change very quickly. They find it annoying and threatening, exhausting to find someone who pushes you all the time. Some players respond really well and go to the next level because they needed that push.

The problem for Rangnick has more been the people upstairs because to these guys once you are in a certain position it becomes about keeping your job rather than doing your job. These types have been threatened by someone who says 'this is not good enough, we need to change this'.

Balague: It looks like it's an interim job and it looks a bit dangerous. If you're creating a new structure, Ralf is someone who has a clear idea of what he has to do.

He can't stand people that do not want to change and I feel there's a lot of those at United. You have to be nice to people and move people along. Is he nice now?

Something that has been missing at United is a lack of clarity in decisions.

Honigstein: He won't have as much authority as a guy who comes in on a three-year deal, but at the same time you can do whatever you want because you are going to be gone anyway. He can be more ruthless in a way.

It is going to be difficult if Ronaldo is a no for him, for example. That could be one not-so-easy thing to work out - how does Ronaldo fit into Rangnick's kind of football? Maybe he can. Maybe the idea can change, maybe Ronaldo can change? It is going to be one of the most fascinating part of this story.

But Ralf has learned to deal with people even if they are not on the same wavelength. The journey, the excitement of six months at Manchester United, with top four, Champions League and FA Cup still to play for, will take on its own dimension.

'Organisation, structure and planning, the future is really brilliant'

Since 2012, Rangnick has operated in a number of high-profile sporting director roles, most notably with the Red Bull stable of clubs and RB Leipzig especially, during which the club rose from the fourth tier of German football to challenging for the Bundesliga title.

He is currently head of sports and development at Lokomotiv Moscow.

Honigstein: I'm not sure if that future role will have real power. I don't think United are set up for that.

But he is at a point in his career where he has set up his own consulting company and is working with clubs, federations and sporting directors.

I think he is at a point where he wants to use what he has learned and give it to whoever needs it. They pay him for his advice and if they don't like it, he moves on. I think he is beyond the cliche of the guy who comes in and has to have full control.

Pfannenstiel: We like to call him, in Germany, the football professor. Everything he does is very well thought out, the way he puts structures in place at every club is something amazing.

Looking at the way Red Bull Salzburg was built or how RB Leipzig was built from a training centre up to the professional team, the youth development... that's all with a lot of thought, a lot of science in it. His organisation, his structure and his planning, the future is really brilliant.

Looking at the way he planned his career after finishing his deal in Leipzig, he wanted to be more on an advisory side anyway and that's what he did in Moscow.

Knowing Ralf and his career and how the football world works, if he comes in and does an unbelievable job and everybody is happy, I think that plan to be an adviser, in the next two years after this season, could easily turn into a long-term appointment as well.

Everything is possible and I think it is all about results and being successful.

Boadu, others for Coach of the Month award

'Back Conte now, or regret it' - Jenas analys

'Forget about the ones you miss'

Is Livramento Saints' next young star?
Next Item