Ole Gunnar Solskjaer's team were booed off the pitch after a 2-0 home defeat by Burnley left them six points off a Champions League spot.

"The scenes in the stadium weren't good," said Fletcher, a five-time Premier League winner with United.

"The chanting, the atmosphere really turned toxic for the first time."

On a bitterly disappointing night for United, goals by Chris Wood and Jay Rodriguez earned Burnley a first ever Premier League win at Old Trafford.

Since Solskjaer was made permanent manager in March, United have lost more Premier League games (12) than they have won (11).

They are fifth in the table - a massive 30 points behind leaders Liverpool, who have two games in hand.

By the time Jonathan Moss blew the final whistle on Wednesday, thousands of United fans had already left Old Trafford.

Fletcher fears the atmosphere at Old Trafford could hurt United's younger players if it does not improve. 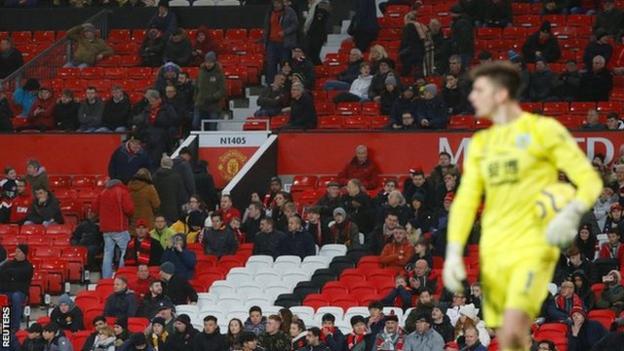 "At the minute you can see with every setback these youngsters are just sinking," he added on BBC Radio 5 Live.

"The scrutiny and the pressure that these kids are under - it was difficult for me coming into the team and I was surrounded by world-class players left, right and centre.

"These lads don't have that support network around them and they are really finding it difficult.

"It might make a few of them, but at the same time it will probably break a few of them as well, which is really disappointing."

During the game, fans vented their frustration with vitriolic chants against United's executive vice-chairman Ed Woodward and the club's owners the Glazer family.

Ian Dennis, senior football reporter for BBC Radio 5 Live, who was commentating at Old Trafford, said: "Regardless of your opinion of Ed Woodward, you cannot ask for someone to die.

Asked about his thoughts on the chanting, Solskjaer said after the game: "For me it's important that we stick together.

"Help the players, help the team and help the club to move forward. I think everyone knows when they have overstepped the line."

Former United defender Rio Ferdinand labelled the night an "embarrassment" and urged those in charge of the club to take action.

"I can't defend this. What has been invested?" Ferdinand, who won six Premier League titles and one Champions League at United between 2002-2014, told BT Sport.

"These young kids now in schools around the country, they are not going to be wearing Manchester United shirts.

"They are not going to be wanting to come here and support Manchester United based on what you are seeing out there. It's just not going to happen, fans are walking out after 84 minutes.

"It's an embarrassment. People at the top need to look and see this and make changes, put a plan in place that people can sit there and see where we are going now. I don't see it." 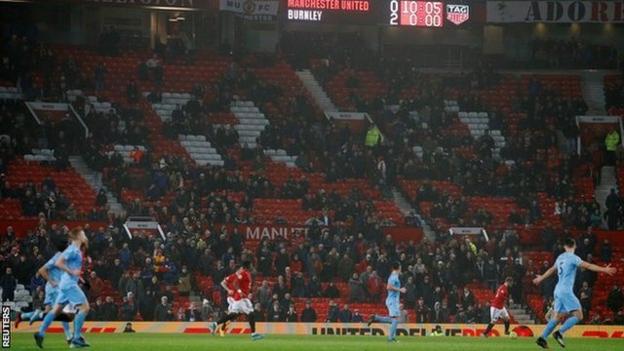 Speaking on BT Sport, the ex-England player added: "Look at the options off the bench. It is miles off it.

'I don't think Solskjaer will last'

Solskjaer signed a three-year contract when he was appointed permanent boss last March after a successful stint as caretaker.

Speaking on Match of the Day, former Arsenal defender Martin Keown questioned whether Solskjaer would still be in charge at the start of next season.

"I don't think he is going to last beyond the end of the season. I know people are saying he should be given more time but this is Manchester United, it is a massive football club."

Phil Neville, a former player and coach at United who was also on Match of the Day, disagreed with Keown.

"I think they have got to stick with him," added Neville.

"The squad to me looks light, it looks inexperienced, it looks weighed down by the expectation.

"I think they need two signings in this window to have any kind of success this season.

"United are where they are at this moment in time and people have got to accept it."

Terry Urbanczyk: It's either Ole or Woodward. I know how that will end as the share price is the most important thing and not the football. Football is poor, Old Trafford left to get run down. Chasing the money is what the Glazers are about.

Joe: Sacking Solskjaer is not the answer. These so-called United fans calling him to go should get real. Until Woodward and Glazers go nothing changes. Fergie was only successful due to his skills at calling the shots as well as his management skills. Ole doesn't have total control due to Woodward, neither did Jose, Louis or Moyes so support the football team and complain about owners. We'll be back but not in the short-term. Knowledgeable football fans know and understand that.

Dan: How I've sat through nearly 70 minutes of this diabolical excuse of a United performance, I do not know. Wan-Bissaka has been our greatest goal threat...WAN-BISSAKA. The player known best for tackling well. Good job we're busy in the transfer window...oh wait.

Sukhraj: Absolutely horrific football from Man Utd. What was Ole doing ALL summer? How does Woodward get to keep his job after that last seven years? It's woeful stuff. Empty seats at Old Trafford should have alarm bells ringing.

Who is Valencia's exciting English teenager?

Ndidi could be out for up to 12 weeks

PSG do not lack respect for Cavani - Tuchel
Next Item