De Bruyne has created 37 chances from open play and 18 from set-pieces. He has made nine assists, three more than any other Premier League player

Kevin de Bruyne has been brilliant for Manchester City this season, creating more chances than any other Premier League player and heading up the assists table too.

For any striker, De Bruyne is a dream to play in front of because of the range of his deliveries.

From his whipped crosses into the box to balls in behind the defence where the weight of the pass is key, he can provide exactly what you need.

De Bruyne can finish too - his goal against Newcastle last week was absolutely incredible - but I am not surprised anymore when he produces things like that, which is the sign of an excellent player; they can do it all the time.

You don't need to be spectacular to be effective, though, as Manchester United's Scott McTominay has demonstrated with his development into one of the most consistent midfielders in the Premier League.

He cannot compare in terms of making chances or goals but, for different reasons, he will be just as important for his team in Saturday's Manchester derby.

'McTominay is Mr Reliable for United'

McTominay will be one of the first names on the United teamsheet at the Etihad Stadium, and he again showed why in Wednesday's win over Tottenham.

The 22-year-old Scot was back after two league games out injured, and brought great energy to an area where that had been lacking.

United boss Ole Gunnar Solskjaer hailed his leadership qualities and called him 'almost undroppable' afterwards, and I can see why. 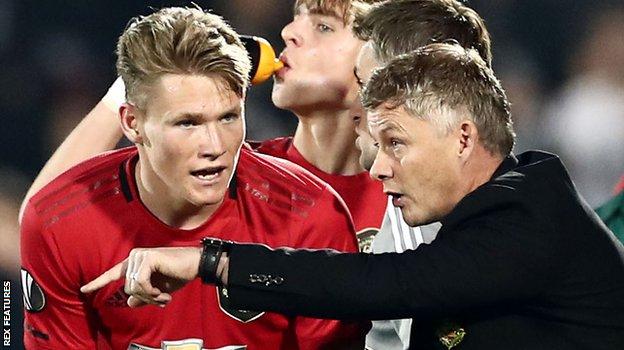 After United's win over Tottenham, Solskjaer spoke about McTominay and said "he wants to be the best player he can be. That is the kind of player I want at this club. He would have suited my squad when I played. He would have fitted right in"

McTominay has been so reliable for him, in what has become a problem area in his team, and United will need his discipline and organisation in the middle if they are to keep City quiet.

City have had issues in that department too, with Rodri taking time to settle into his role as Fernandinho's replacement as their midfield anchor.

But Rodri was magnificent against Burnley on Tuesday night, which is a great sign for City going into the weekend.

Whether it was the first ball or second ball, he stopped the Clarets virtually every time they came forward, and provided superb protection for his back four.

They needed it, because it had been too easy to get through their backline in previous matches.

It is all very well Guardiola saying they only faced two shots on target against Newcastle on Saturday, but they both went in.

It turned into an excellent week for the two Manchester clubs, and City and United will both head into Saturday's derby with reasons to believe they can come out on top.

City played as if they had a point to prove at Burnley on Tuesday night, and the way they celebrated afterwards showed how much it meant to them.

Why was that win so significant? Well, everyone is talking about Liverpool and Leicester in the title race. Pep Guardiola's side had almost been discounted as contenders and were sitting 11 points off the top.

They had not played well in the previous couple of weeks, and I thought they would have a tough time of it at Turf Moor.

We saw City's response, and they were brilliant. They were back to their best with an almost perfect display that screamed 'don't forget about us, because we are the defending champions, and we are not going anywhere'.

Similarly, Wednesday's victory over Tottenham was absolutely huge for United. Their tempo was excellent and they were right at it from the start.

I liked the way they went after Spurs from the beginning of the game, how they got back on top after conceding an equaliser against the run of play, and then held on, pretty comfortably in the end.

They have not managed any of those things often enough in recent weeks,

If the reports that United boss Ole Gunnar Solskjaer's future is riding on these two games against Spurs and City are correct, then he has come through his first test.

United head for the Etihad Stadium next looking for another big performance. Their recent form against the Premier League's heavyweights suggests they will find one.

'City will keep the ball, but United can create chances'

Solskjaer's side are yet to lose against a team that finished in last season's top six, and they are one of only two teams to get the better of Leicester in 2019-20 too.

Their win over Spurs was arguably their most impressive of the season so far - against a team managed by their former boss Jose Mourinho, who would have had his players fired up for his first return to Old Trafford as a boss since being sacked by United.

Yes, they still need some consistency, and to prove that they can turn up against lesser opposition too, because they will get nowhere if they only play well in the bigger games.

But that will not be a problem on Saturday. It doesn't come much bigger for them at the moment than City away.

While City should dominate possession on Saturday, United's threat on the counter means they will not mind that one bit.

United love playing teams who come and attack them, because they have the pace to hurt them on the break, and I am sure they will get opportunities at the Etihad.

Marcus Rashford was absolutely superb up front against Spurs, and did everything that was asked of him. He looked very sharp, and will fancy his chances of getting more goals at the weekend.

Bekele to take on Kipchoge at London Marathon