Gareth Bale: 'I definitely have a bit more excitement playing for Wales'

Gareth Bale says he is "more excited" playing for Wales than Real Madrid and has laughed off criticism from the Spanish media.

The forward, 30, has been criticised in Spain for training with Wales despite not playing for Real for a month.

But before Wales' crucial Euro 2020 qualifier in Azerbaijan on Saturday, he said he had no case to answer.

"With Wales, I'm speaking my own language and feeling more comfortable," said Bale.

"I definitely have a bit more excitement playing for Wales.

"I've been with most of the players, especially the older ones, since we were in the Under-17s. It's like playing with your mates down the park on a Sunday. 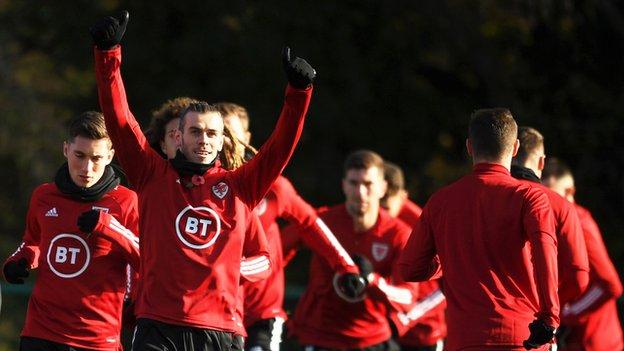 "But it still doesn't change what I give on the pitch. I always give 100% wherever I am, and that's what I always strive to do."

Spanish newspaper Marca described Bale training with his national side as the 'Miracle in Wales', as he had not played for Real since injuring his calf during his country's 1-1 draw with Croatia in October.

Former Real striker and director of football Predrag Mijatovi? then claimed Bale prioritised Wales - and even his interest in golf - over his club side.

That prompted one Wales fan to print a flag which will be on display in Tuesday's qualifier against Hungary at Cardiff City Stadium, reading: 'Wales. Golf. Madrid. In that order.'

"I've heard some stories but I don't really take notice," Bale said. "My friends tend to send me some funny pictures or whatever they write.

"I find it hilarious to be honest, especially some of the pictures and stuff my friends send me. On one, it said 'triple bogey' and I've never had a triple bogey! At least give me an albatross! It's funny. 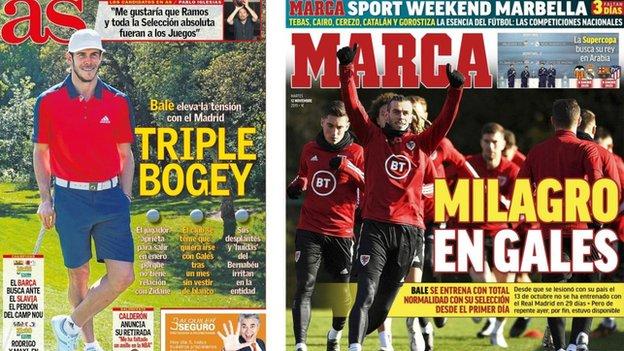 "Some of the things I have seen, people don't understand and don't know what they're on about, so I just find it quite funny.

"I've tried to get back [to fitness] as quick as I can. If there had been a Real Madrid game this week, I would've been fit and training to play.

"Maybe to them [the Spanish media] it doesn't look great but it's just a kind of coincidence that the national team comes around this week and I've returned to full training.

"If I'm fit, no matter where I am, I'm going to try and play, whether it be for Wales or Madrid. For me it was a no-brainer: if I'm fit to play then I'll give it my all."

Bale is lacking match fitness and after a similar spell on the sidelines before June's double-header in Croatia and Hungary, he admitted it was a struggle to play two matches in quick succession having played so little beforehand.

But before the final two pool matches of Wales' Euro 2020 qualifying campaign, Bale is confident he has trained enough to feature in both games.

"We understand how big the games are," Bale added.

"My fitness, I've done my rehab, done a full week's training. Obviously there are two big games and I'm not sure if I'll play the two whole 90 minutes but I'll do my best to play as much as I can.

"I fully understand the position I'm in. I've done as much as I can in terms of trying to get back as quick as I can.

Zaha calls for 'education and change'