The baby was brought to the hospital in a critical condition, but now she is healthy

A premature newborn baby found buried alive in a clay pot in northern India has fully recovered, her doctor says.

She was brought to hospital in a critical condition, suffering from septicaemia and a dangerously low platelet count in mid-October.

She has now gained weight and breathing and platelet counts are normal, her paediatrician Ravi Khanna told the BBC.

Her parents have not been traced and she will be put up for adoption after a mandatory wait period.

For now, she is now in the custody of child welfare authorities in Bareilly district, in the northern state of Uttar Pradesh.

She was found accidentally by a villager who was burying his own daughter, who was stillborn. Hindus generally cremate their dead, but babies and young children are often buried.

The villager said he had dug about 90cm (3ft) below the surface when his shovel hit the earthen pot which broke and he heard a baby crying. When he pulled out the pot, he found a baby in it.

She was first taken to the local government hospital but, two days later, she was moved to Dr Khanna's paediatric hospital which has better facilities.

Doctors said she was a premature baby, possibly born at 30 weeks, and weighed a mere 1.1kg (2.4lb) when she was brought in. She appeared visibly shrivelled, was hypothermic and had hypoglycaemia (low blood sugar).

"On Tuesday, when we handed her over to the district hospital authorities, she weighed 2.57kg [5.66lb]. She's accepting bottle feed and she is now totally healthy," Dr Khanna said on Thursday. 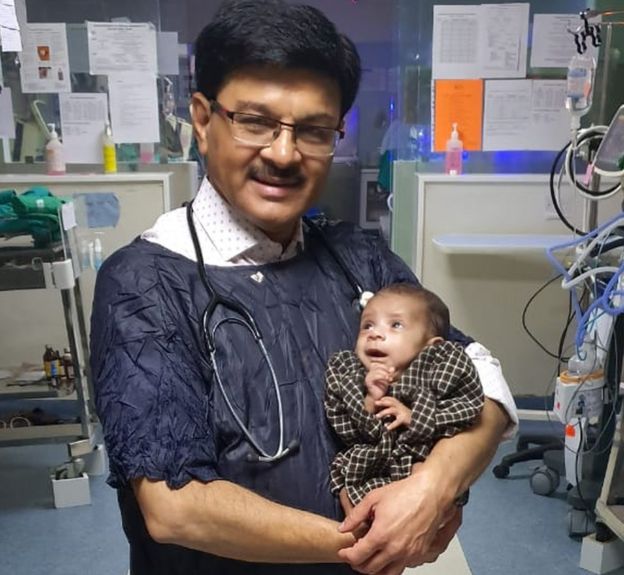 It's not known how long the baby lay buried under ground and doctors say they can only guess how she survived.

Dr Khanna said she might have been buried as long as "three to four days, surviving on her brown fat". Babies are born with fat on their abdomen, thigh and cheek and they can survive on it in an emergency for some time.

But other experts give a more conservative estimate - they say she could have been only buried for "two to three hours" and might have survived for "another hour or two" if she hadn't been rescued.

An air pocket inside the pot could have provided her with oxygen or some oxygen may have filtered through the loose soil, while the fact the pot was not made of dense clay could have helped as well, they say.

In October, police lodged a criminal case against "unknown persons" and began looking for the newborn's parents.

They said they believed her parents were complicit in her burial, because even after the case was widely publicised, no-one came forward to claim her.

Officials have not speculated on possible motives, but India's gender ratio is one of the worst in the world. Women are often discriminated against socially and girls are seen as a financial burden, especially among poor communities.

Although most unwanted female foetuses are aborted with help from illegal sex determination clinics, cases of baby girls being killed after birth are not uncommon either.

CPP is ready to rescue Ghana-Greenstreet

NDC will prioritize welfare of the Aged

“Ghanaians are appreciative of NPP”- CVM