Kenya's ugali scare: How safe is your maize flour?

Several well-known brands of maize flour have been taken off supermarket shelves in Kenya, after a warning about unsafe levels of a poisonous substance known as aflatoxin.

This has led to widespread concern, as maize is the country's main staple. The flour is used to prepare ugali, a cooked starchy paste the key ingredients of which are just the flour and water. Maize is also used to prepare another traditional dish of the region, githeri, which is a mixture of maize and beans, cooked whole.

Maize is not only a common dish in most households in Kenya but it is also a familiar food across east, central and southern Africa, going by different names such as nshima, sima, sadza, mealie meal or posho. In fact Africa consumes 30% of maize produced in the world, research shows.

But it is not just maize that is often contaminated with the poisonous substance. In East Africa, maize, milk and groundnuts are the main sources of aflatoxin exposure. These are commonly mixed together to make a porridge for infants and children, putting them at particular risk of aflatoxin poisoning.

For Kenya, aflatoxin contamination is a long-standing problem. The country is considered a world hotspot, with incidents of acute toxicity recorded in 2004 and 2010.

Maize and aflatoxin in East Africa

It is likely that a problem with food in one country could have an effect in its neighbours, as farm produce is often traded across borders. Already, Uganda and Rwanda have banned peanut brands imported from Kenya after the Kenya Bureau of Standards (Kebs) blacklisted them because of unsafe levels of aflatoxin.

How do you know which flour is safe?

Kebs, which is responsible for ensuring the overall quality of standards in industry, has suspended the licences of five brands of maize flour and ordered that they be removed from the market.

These are Dola, manufactured by Kitui Flour Mills, Starehe made by Pan African Grain and Kifaru by Alpha Grain Limited.

The other banned brands are 210 (Kenblest Limited) and Jembe by Kensalrise Limited. All these brands are widely sold across the country. 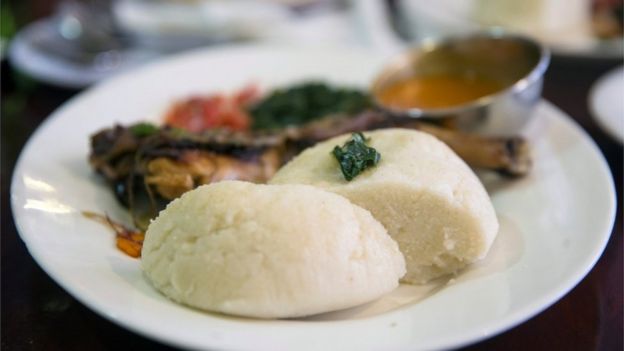 Ugali is traditionally eaten with your hands

Kebs has said that the suspension followed market surveillance and tests that established that these brands had more than acceptable levels of aflatoxins.

But an association representing cereal millers in the country protested against the ban, questioning the validity of methods used to test aflatoxin levels. They say other independent tests came up with different results.

Indeed tests commissioned by a local TV station for a investigative report had a different outcome. The report by NTV indicated that three different brands, Jogoo, Jimbi and Heri, had unsafe levels of aflatoxin - at 13.8, 16.2 and 16.19 parts per billion (microgram per kilogram) respectively. Kebs considers amounts of more than 10 per billion in maize and other grains to be unsafe.

However the TV report said its tests on the Kifaru brand of maize flour, which Kebs has suspended, found it to be aflatoxin-free.

For consumers, this is all confusing and it is difficult to be sure that all the dozens of maize products that remain on sale are safe.

"Can someone tell me the reason as to only the five milling companies have been recalled from the market? All millers buy maize from Kenya National Cereals and Produce Board, which is government owned," Morphat Gold said on Twitter.

Can someone tell me the reason as to only the 5 milling companies have been recalled from the market,

All millers buy maize from Kenya National cereals & produce Board, which is Government owned,

Yet all maize in their stores were allegedly poisoned

Many Kenyans also take grain harvested from their farms to centres for milling. The NTV investigation pointed out that this maize doesn't fall under the auspices of the standards regulator and so it is difficult to know whether or not it is safe.

It has not helped that Kebs has not responded to these queries, though it has indicated to the BBC that it will be doing so at a press conference at an unspecified date.

So even with the suspension of the maize brands, there is still cause for the consumer to be cautious and vigilant.

What is aflatoxin and why should you care?

Aflatoxin is one of a group of naturally occurring poisonous substances, known as mycotoxins, produced by certain types of mould or fungi.

Aflatoxin is one of the most poisonous of the mycotoxins and has gained the most attention because of its occurrence in food and its severe effects on human health, according to the UN World Health Organization (WHO).

The toxic fungi that produce it thrive in warm and moist environments, growing in soil, decaying vegetation, hay and grains.

WHO estimates that about 25% of food produced globally is destroyed every year because of aflatoxin contamination - and there have been reports of Kenya destroying tonnes of maize for this reason.

What type of food is likely to be contaminated?

Other than maize, crops that are frequently affected are cereals such as rice, sorghum, millet and wheat. Cassava, nuts and oilseeds, including groundnuts, cotton seeds, sunflower and coconut, are also regularly contaminated. 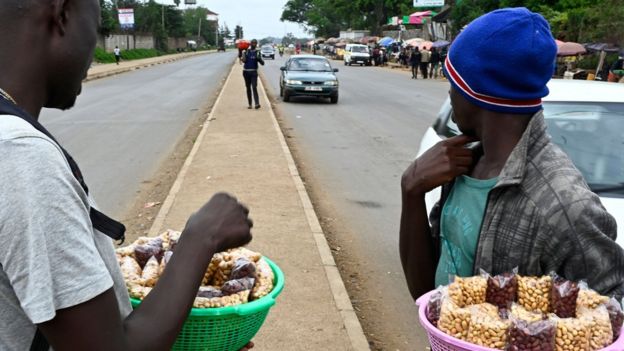 Groundnuts are a common food in East Africa

Spices and herbs such as coriander, turmeric, ginger could also be affected. Some fruits, vegetable oils and fats, as well as milk and eggs from animals fed with contaminated feeds, could also be ways human beings can get aflatoxin poisoning.

How does it affect people and is it deadly?

Globally, deaths resulting from aflatoxin contamination are rare. But yes, aflatoxin consumption could be fatal.

In 2004, more than 80 Kenyans died from consuming maize that had been contaminated with a toxin-producing fungus. Another 180 were admitted to hospitals.

At the time a doctor at Makindu hospital told the BBC that patients had symptoms of liver failure with yellow eyes, swollen legs, vomiting and bleeding from the nose.

Eating food with unsafe levels of aflatoxin could have long-term adverse effects on health and could be life-threatening, the WHO cautions. 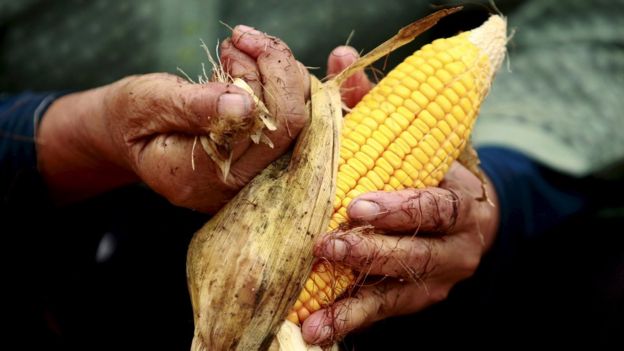 Aflatoxin is considered a carcinogen - something that is capable of causing cancer. The WHO indicates the long-term effects of the toxin trigger cancer and cause immune deficiency. David Osogo, a nutrition and health researcher at Africa Population Health Research Center (APHRC), says aflatoxin contamination in the human body is linked to high risk of liver and kidney cancer.

The UN's Food and Agriculture Organisation (FAO) notes that the principal target for aflatoxins is the liver, with large doses of the substance leading to acute illness and death though liver cirrhosis, an irreversible scarring of the organ.

Consistent small doses can affect nutrition and the immune system. Children are considered particularly vulnerable and exposure can lead to stunted and delayed growth.

Some studies also suggest that aflatoxin could impair the development of an unborn baby in the womb, as toxins pass from mother to the foetus through the placenta, according to the US National Center for Biotechnology (NCBI). Toxins can also be passed through breast milk.

How do you know if a food has aflatoxin?

Inadequate drying and storage in damp conditions provides the right condition for mould to grow and contaminate food produce. So it would be best to avoid food that has mould on it. 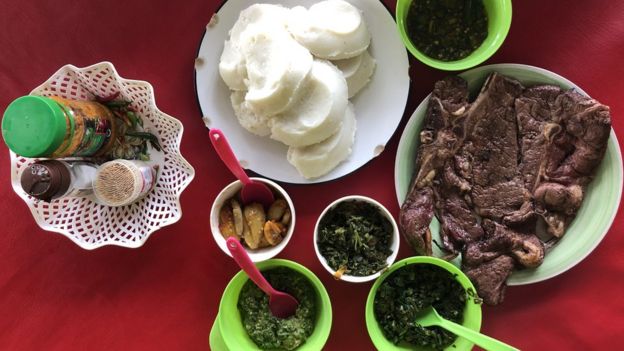 Ugali can be eaten with any meat, a sauce and spinach

However, aflatoxin is colourless, odourless and invisible, and there is often no sign of contamination.

It also tasteless, though a large amount of fungus could make the grain or other food taste bitter. It would be better to avoid any food that has an unnatural or bitter taste.

The only way to test aflatoxin is to do it scientifically, so there is not much that you can do to physically detect the poison.

So what can you do to avoid the toxic substance?

WHO advises consumers to do a number of things to prevent exposure to the harmful substance:

There are other grains that have higher energy and nutrient levels and are less susceptible to aflatoxin infestation. Switching to other foods may then also be an effective way of addressing the problem of dietary balance and malnutrition.

How do you prevent aflatoxin contamination?

The FAO considers the development of fungal-resistant varieties of plants as one way to manage or control aflatoxin contamination. 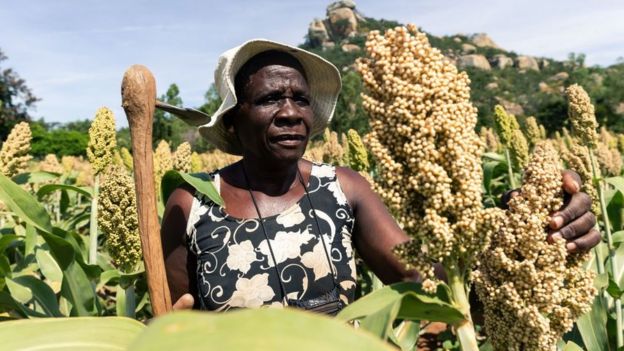 Other ways to prevent aflatoxin exposure include lowering moisture content of plant seeds after harvesting and during storage, and storing commodities at low temperatures. Using fungicides and preservatives against fungal growth are other options.

Kenya has approved a biocontrol product, a chemical that is introduced to the soil to help minimise the amounts of the toxic fungi that produces aflatoxin. Studies have shown that the product, known as Aflasafe, reduces aflatoxin contamination and helps improve the quality of food.

Namibia to suspend learning this week

PM tells France 'not to let down guard'