The Paramount Chief of the Paga Traditional Area, Pe Charles Awampaga II, and the family of the late Clement Kubindiwu Tedam have lauded President Nana Addo Dankwa Akufo-Addo for his role which ensured that their kinsman was given a befitting state burial.

“It is with great relief that we are here today to purge ourselves of a feeling of a seeming ingratitude to you, your government and the leadership of the New Patriotic Party (NPP) for the great show of love and respect for our late father and uncle, C. K. Tedam, before and during his funeral in June 2019,” they said.

The chief and family of the late C. K. Tedam gave the commendation through a spokesperson, Professor Albert Luguterah, when they paid a courtesy call on the President at the Jubilee House in Accra last Tuesday to thank him.

The delegation gave President Akufo-Addo a bowl of cola in line with tradition and a smock in appreciation of what he did for them.

Mr Tedam, who until his demise was the chairman of the Council of Elders of the New Patriotic Party (NPP), passed away on Friday, April 26, 2019 and was buried at Paga in the Kasena Nankana West District in the Upper East Region on July 22, 2019.

Prof. Luguterah informed the President that the Paga Traditional Council had allocated 200 acres of land for new faculties of the University for Development Studies (UDS) to be named after the late Tedam and said more land would be released when the need arose.

He appealed to President Akufo-Addo to help renovate and upgrade the Wa Memorial Hospital in Navrongo to help in the university’s mandate, as well as take care of the health of the people. 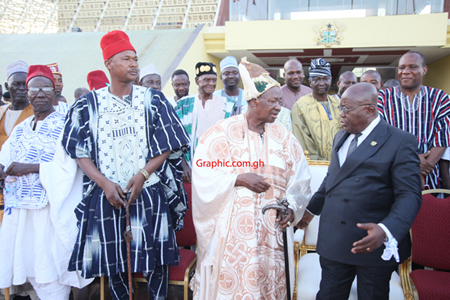 The Navrongo Campus of the University for Development Studies (UDS) in the Upper East Region is to be named after the late C.K. Tedam.

Already, processes have commenced to make the university autonomous and when the various parliamentary processes are also completed, it will be known as the C.K.Tedam University for Technical and Applied Sciences.

Prof. Luguterah appealed to the President to deliver the development projects that C.K. Tedam was pursuing, which included the conversion of the health centre at Paga to a district hospital, the conversion of the Paga Senior High School to a boarding school and the construction of link roads from Paga for easy access to the Eastern and Western areas of the district.

President Akufo-Addo described C.K. Tedam as “noble and worthy man who we should all recognise and appreciate. You are very lucky that you produced such a man for our country and we thank you for that.”

He said what was required to be done to set his memory and name firmly in the annals of history would be done and that already the processes were ongoing for the Navrongo campus of the UDS to be named after him.

The President also gave an assurance that the other development issues they raised would be addressed.

Close your ranks for devt of Asokwa — MCE

SA to reopen places of worship

Time to 'move on' from Cummings row

All registered voters should take part-NCCE
Previous Item
NEXT