Turkish President Recep Tayyip Erdogan has vowed to press on with an offensive in northern Syria until his mission to create a "safe zone" is complete.

Turkish troops and allied Syrian rebels launched an operation to clear a Kurdish militia from a border area last week, after US troops pulled out.

The Turkish government views the militia as a terrorist group.

Mr Erdogan has also said he will meet the US vice-president on Thursday after all, despite appearing to rule it out.

The Turkish president told Sky News on Wednesday that Mike Pence and US Secretary of State Mike Pompeo would only "meet their counterparts" in Ankara.

"I am standing tall. I will not meet them," he said. "I will speak when Trump comes."

Turkey's president @RTErdogan tells @AlexCrawfordSky he will not speak with the US Vice President about a ceasefire in Syria during his visit - adding that he will only talk to President @realDonaldTrump.

Following the comments, a spokeswoman for Mr Pence said he would still be travelling to Turkey.

Mr Erdogan's communications director then tweeted a clarification: "He does plan to meet the US delegation led by @VP tomorrow."

Fahrettin Altun also included a video clip of the president telling Turkish reporters: "For the moment, I am not meeting anyone other than Pence and Pompeo."

Turkey launched the offensive in northern Syria a week ago to push back from its border members of a Syrian Kurdish militia called the People's Protection Units (YPG) and create a 32km (20-mile) deep "safe zone" along the Syrian side of the border where up to two million Syrian refugees can be resettled.

The YPG dominates an alliance of Kurdish and Arab militias called the Syrian Democratic Forces (SDF), which has driven the Islamic State (IS) group out of a quarter of Syria over the past four years with the help of air strikes by a US-led multinational coalition.

On Sunday, after US troops began withdrawing from the region and Turkish-led forces made gains, the Kurds agreed a deal with the Syrian government for the Syrian army to be deployed on the border to help repel the Turkish assault.

What did Mr Erdogan say?

In remarks on Wednesday, Mr Erdogan called on "terror organisations" in northern Syria to lay down their arms in order to end Turkey's military operation.

"Our offer is that immediately tonight all terrorists should drop their weapons, equipment and everything, destroying their traps and leaving the safe zone we have designated," he told a meeting of his Justice and Development Party's (AKP) parliamentary group.

He also rejected calls, apparently from foreign leaders, to enter mediation with the group. 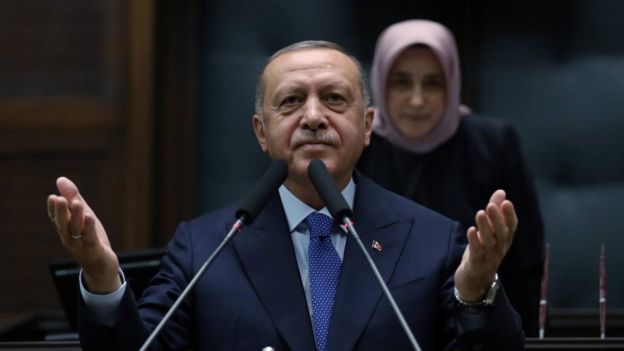 Mr Erdogan has rejected US calls for a ceasefire

The Turkish government insists the YPG is an extension of the Kurdistan Workers' Party (PKK), which has fought for Kurdish autonomy in Turkey since 1984 and is designated as a terrorist group by the US and EU.

Mr Erdogan has maintained the offensive will only end when his planned "safe zone" is cleared of Turkish forces.

Critics of the Trump administration say the withdrawal of US troops from the region gave Turkey a "green light" for the offensive.

The US has repeatedly denied this, and on Monday Washington announced sanctions on Turkish ministries and senior government officials.

Mr Pence and Mr Pompeo are due to travel to the Turkish capital, Ankara, on Thursday.

On Monday, Mr Pence warned that the US sanctions against Turkey would be escalated "unless and until Turkey embraces an immediate ceasefire" and negotiated a long-term settlement on the border. 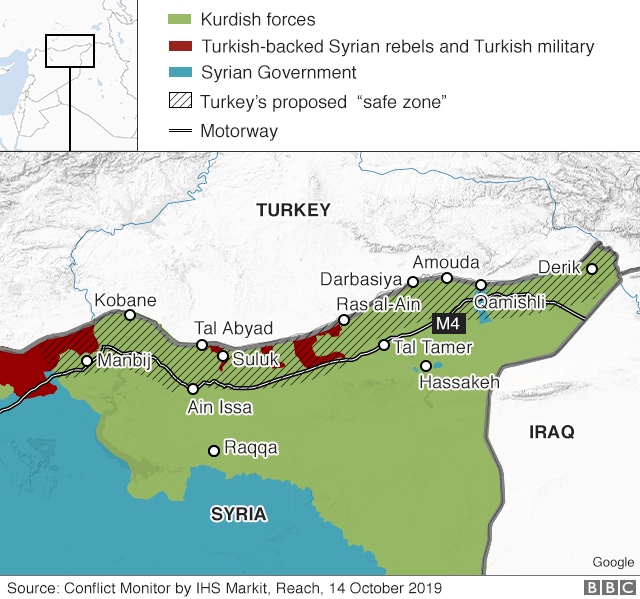 US President Donald Trump has faced mounting pressure to take action against Turkey - a key Nato partner - including from Republicans usually loyal to his administration.

But on Tuesday Mr Erdogan maintained Turkey "will never declare a ceasefire" despite US calls.

"They are pressuring us to stop the operation. They are announcing sanctions. Our goal is clear. We are not worried about any sanctions," the president added.

Russian President Vladimir Putin has also discussed the situation with Mr Erdogan in a phone call, a Kremlin spokesman said on Wednesday. Mr Erdogan had accepted an invitation to visit Russia for a working visit this month, the spokesman added.

Russia has vowed it will not allow clashes between Turkish and Syrian forces.

What's the latest on the ground?

Dozens of civilians have reportedly been killed in Turkey's operation so far and at least 160,000 have fled the area, according to the UN.

The medical charity Médecins Sans Frontières (MSF) said it had "taken the difficult decision to suspend the majority of its activities and evacuate all its international staff from north-east Syria".

On Tuesday, Syrian government forces entered the strategic town of Manbij, inside the area where Turkey wants to create its "safe zone".

Meanwhile, Turkish troops and pro-Turkish, anti-government fighters have also been gathering near Manbij.

Over the past two years, hundreds of US troops have visibly patrolled the strategic town, but they left earlier this week.

On Tuesday, Russia - a key ally of Syrian President Bashar al-Assad - said its forces were patrolling along the "line of contact" between Syrian and Turkish forces.

For now, Syrian forces have not been deployed between Tal Abyad and Ras al-Ain, where Turkey has focused its efforts.

How did we get here?

Kurdish-led forces have been a key ally of the US in the fight against the IS in Syria.

They described the US withdrawal, which preceded Turkish action, as a "stab in the back". 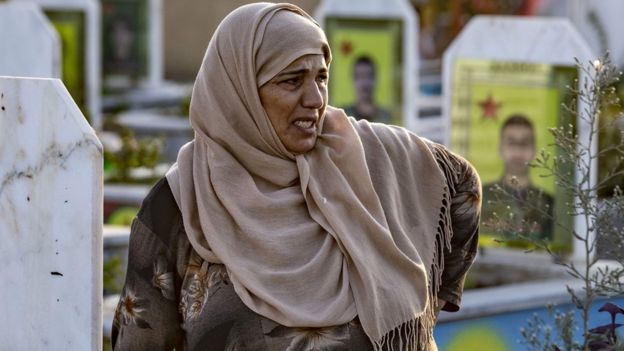 There are fears the destabilisation could lead to a resurgence of IS, as thousands of former fighters and their relatives are being detained in northern Syria.

Hundreds of IS family members are said to have already escaped from one camp.

Analysts say that apart from fighting IS, the Kurds were fundamental to the US in limiting the influence of rivals Russia and Iran.

Major General Peprah should be next CDS

NHC call for peace ahead of 2020 elections