Justice Barbara F. Ackah Yensu administering the oath of office to the new members of the Council on Foreign Relations at the induction ceremony in Accra

The Council on Foreign Relations (CFR) Ghana, a foreign policy think tank, has inducted 17 new members to help advance Ghana’s foreign policy and its relations with other nations.

The aim of the council is to ensure that stakeholders are well informed about current international issues, as it also reaches out to businesses, economists, technologists and academics to help address the country’s development challenges. 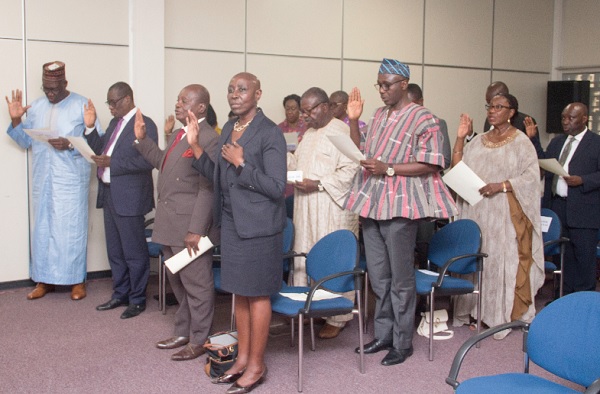 At the induction ceremony in Accra last Wednesday, the President of CFR Ghana, Mr Daniel K. Osei, said the council would next month launch its annual report, which will include themes discussed at various lectures on international issues organised by the council.

He said the council would also introduce a journal that would contain foreign policy issues, such as maritime security along the Gulf of Guinea, the closure of Nigeria’s border and its implications for regional integration, the Africa Continental Free Trade Area (AfCFTA) agreement and the 2020 elections and their security implications in West Africa.

He urged members with expertise in democracy to volunteer and join sub-committees of the council, which would soon be established to provide in-depth information on some of the areas to be covered in the journal.

A former Vice-President of the International Criminal Court, Professor Akua Kuenyehia, asked the new members to bring their expertise on board and also offer actionable steps for policy makers to adopt to address the problems facing Ghana and Africa as a whole.

On behalf of her colleagues, Ms Quayson-Sackey expressed appreciation to the council for admitting them to its fold, saying: “We are committed to bringing our expertise on board to achieve the aim of the council.”

The council was inaugurated by President Nana Addo Dankwa Akufo-Addo in February this year, with a charge on members to act as facilitators in improving policy-making and execution and to be key agents of social change.

The council is composed of a diverse group of retired diplomats, experienced lawyers, media experts, financial players, among other experts, numbering more than 30.

The idea of forming CFR Ghana was mooted by Mr Kabral Blay-Amihere, a former Ambassador to Cote d’Ivoire, for like-minded Ghanaians to come together to reflect on foreign policy issues.

After months of consultations, the council was duly registered as a private company limited by guarantee on February 23, 2011.

GAF investigates cause of aircraft overrun

Withdrawal for OV will have dire consequences
Previous Item
NEXT