TV host Wendy Williams has apologised after appearing to mock Joaquin Phoenix for a scar on his upper lip.

The US presenter was accused of insulting people with a cleft palate while discussing the star's appearance.

"When he shaves off his moustache he's got a hairline fracture. He's got one of those... what do you call it? Cleft lip, cleft palate," she said.

She then pulled up her top lip, saying: "I find it to be very attractive," prompting laughter from the audience.

After facing strong criticism, Williams wrote on Twitter that she wanted to "apologise to the cleft community".

But the Cleft Lip and Palate Association said: "An apology on Twitter really isn't enough."

The association's spokeswoman Anna Martindale told BBC News: "She did this on her show with millions upon millions of people watching, and I think she needs to apologise on her show as well."

Williams, whose daytime show is syndicated on different stations around the US, made the original remarks last week while discussing Phoenix's best actor award at the previous night's Golden Globe Awards.

Referring to Phoenix's scar, the host said: "He's got this, he's got this," while hooking her finger under her top lip to expose her teeth and gums.

Ms Martindale said people with the condition would recognise the gesture "as being like the first thing that bullies do". 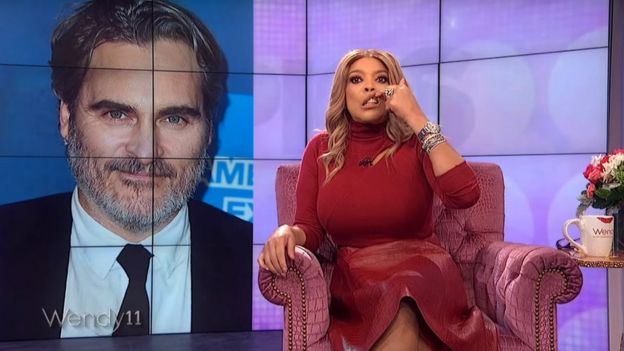 The presenter was widely criticised for mimicking the condition, which affects one in every 700 babies born in the UK

She added: "With the sarcasm and the ways in which she was talking about him, it was really clear that she was intending to mock him specifically for that.

"We work really hard to kind of create a very positive space where people can feel empowered and confident about their future about their child's future.

"No matter how much work we and other organisations like us do, we'll never have as much impact as 10 seconds on the television from someone with that much of a viewership doing something like that."

Those criticising Williams included UK TV presenter Carol Vorderman, who is an ambassador for the Cleft Lip and Palate Association. "Mimicking a cleft lip, and making a joke about it, is disgraceful. Have you any idea the pain and operations a child with cleft must go through as they grow?" she wrote on Twitter.

On Wednesday, Williams addressed her apology to Adam Bighill, a player for Winnipeg Blue Bombers of the Canadian Football League. Both he and his son Beau were born with a cleft lip and palate. Four-month-old Beau had surgery on Wednesday.

Bighill had described Williams' actions as "sickening, and a reminder to many of how they were actually made fun of". After her apology, he said he forgave the host.

Williams also said her show was making donations to US charities Operation Smile and the American Cleft Palate-Craniofacial Association.

Phoenix has rarely spoken about his condition, but it is thought to be a microform cleft, which is a mild form of cleft lip that looks like a scar.

What is cleft lip and palate?

The artistic wizard who brought Oz to life

Actors now know their worth

How tech is aiding music in Malawi

The jurors in the Weinstein trial
Next Item