Lil said it was vital to 'keep your sense of humour'

She may be turning 100 years old - but Lil Thomas is still the youngster when it comes to her sister.

Lil, of Newport, has just become a centenarian, following in the footsteps of her 108-year-old sister, Amy Winifred Hawkin.

With a combined age of 208, they are thought to be among the oldest living sisters in Wales.

Between them, they have received six birthday cards from the Queen.

Both sisters have received one to mark their 100th, while Amy - known as Win - was also sent a card when she turned 105 and has had one every year since.

Born a year after the end of World War One, Lil was Wales' first female bus conductor in World War Two between her career as an entertainer.

Having grown up in the Pillgwenlly area of the city, she was a natural performer.

"I was fortunate to have a pitch perfect voice at the age of two," she said.

"It was like Katherine Jenkins - but just not trained." 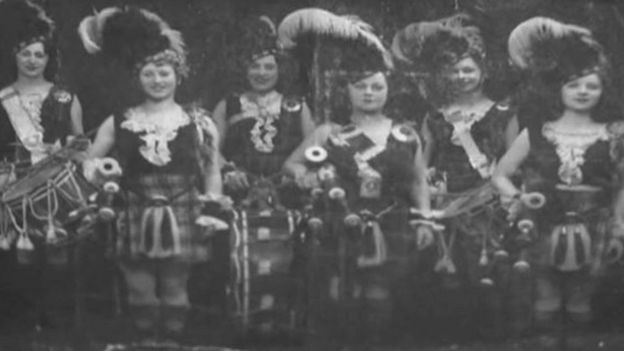 Lil (second from right) during her days as a performer

It was little surprise that she was soon a regular on the stage of Newport's Empire Theatre, singing, tap dancing and playing the accordion while her older sister was part of a dance troupe and known as "the highest kicker in Wales".

With the outbreak of war in 1939, Lil volunteered to be a bus conductor.

"Conductresses were needed during the war because of the black out and there were a lot of Irish boys working here who didn't know where they were going," said Lil.

"We had a small lamp on our front which was the only light inside the bus.

"It was so dark that you had to call out every stop, whether you could see it or not.

"But we used to have a laugh on the last bus, singing songs with the boys on their way home from the pub." 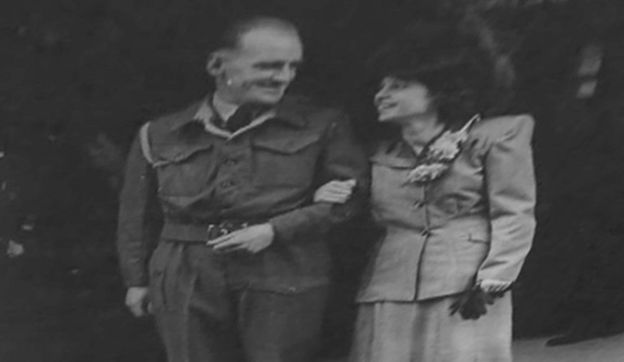 The couple lived in South Africa for 23 years

After the war, Lil married and moved with her husband Donald, a deputy post master, to South Africa.

However the couple still loved entertaining and travelled the country performing for charities.

"We travelled from Durban to Johannesburg playing in church and town halls for the elderly who could barely afford to live," she recalled.

"My husband played the piano and could sit from 7 o'clock and not play the same song twice all night." 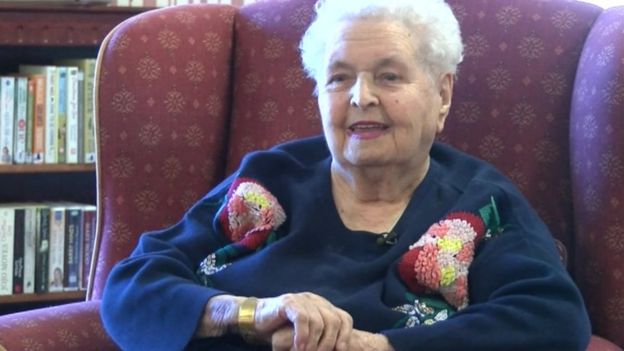 Lil continued to sing until she was 93

The couple returned and a three-month caretaker job in charge of the Bridge Inn in Llangwm, near Usk, Monmouthshire, turned into a 12-year stay.

She said she was the only publican in the area who would welcome blind people, as others turned them away as they believed visually impaired people would spill their drinks.

It was only when she was well into her 90s that Lil stopped singing but, now living in a care home in Bettws, she still loves to dance.

Longevity is clearly in the blood with her sister, who goes by her middle name Win, thought to be one of the oldest living Welsh people.

But what is Lil's best advice, after a century?

"Never lose your sense of humour because if you can't laugh, especially at yourself, you will never get through it all."

Meanwhile, Win will turn 109 in January, when she can expect her sixth letter from the Queen.

"I got a stack of them there, a boxful!" she added, saying it was "great" the sisters could still celebrate birthdays together.

Havana gets its own Eiffel Tower

Kelly Clarkson to fill in for Simon

'Planet of Apes' movie in the works
Previous Item
NEXT

Celebs urged to support ban on alcohol
Next Item