In Leaving Neverland, Wade Robson (pictured) says he was abused by Jackson in the 1990s

Michael Jackson's estate has called the decision to give Leaving Neverland the Emmy Award for best documentary a "complete farce".

Leaving Neverland, which first aired in March, focuses on two men who claim the pop superstar abused them as children.

It said there was "not one shred of proof" to support the show's claims.

Leaving Neverland earned a total of five nominations ahead of the weekend's Creative Arts Emmys, and it went on to win outstanding documentary or non-fiction special. 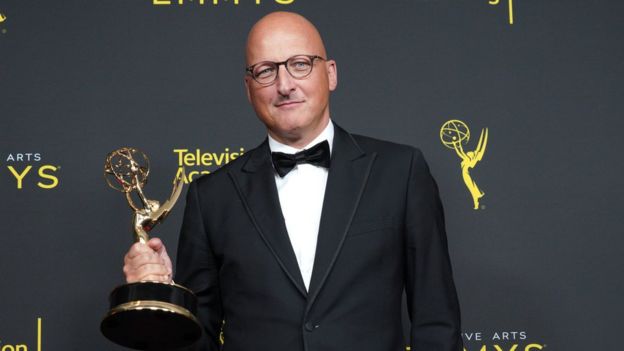 The controversial film, directed by Dan Reed, includes interviews with Wade Robson and James Safechuck, who were aged seven and 10 when the singer befriended them and their families.

When the Emmy nominations were first announced, Reed said the recognition meant a great deal to all involved.

"Since Leaving Neverland aired in March, it has launched many important conversations about child sexual abuse and the grooming that accompanies it," he said. "This was why James Safechuck and Wade Robson and their families spoke out, and why we made the documentary.

"We're delighted that the Academy has honoured that purpose."

But after the win, the Jackson estate said in a statement to The Hollywood Reporter: "Not one shred of proof supports this completely one-sided, so-called documentary which was made in secrecy and for which not one person outside of the two subjects and their families were interviewed."

After Leaving Neverland's premiere in January at the Sundance Film Festival, Jackson's estate called the project "a tabloid character assassination" and insisted it "isn't a documentary".

Stars back Boyega after BLM protest

Meghan Markle Speaks Out About Protests

‘The Rock’ calls out Trump

'Seinfeld' will head to Netflix in 2021
Next Item