Pound surges to two-year high against the euro

Sterling has jumped after opinion polls suggested the UK would avoid a hung parliament after next week's election.

The pound reached a seven month high against the dollar and its highest level against the euro since May 2017.

The move came after polls suggested a 10-point lead for the Conservative party and a parliamentary majority.

However, analysts cautioned against relying too much on one poll and said the pound gained momentum after it went past the $1.30 mark. 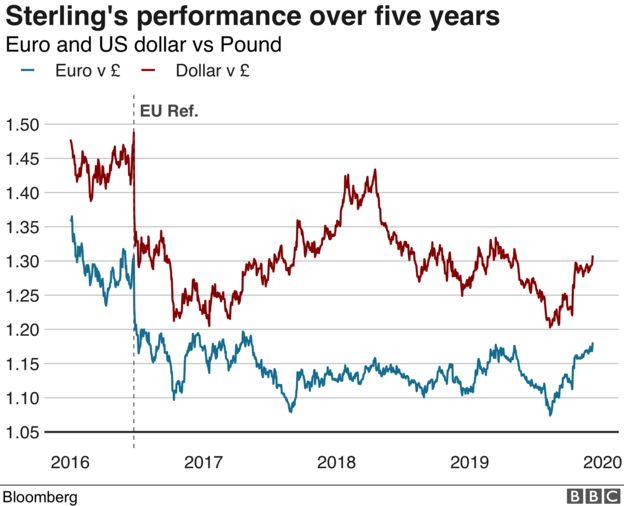 The pound has risen sharply since October, gaining 6% in two months, after the EU granted Britain an extension to its departure from the bloc.

This week sterling climbed further as investors saw the prospect of a hung parliament receding.

Jeremy Stretch at CIBC World Markets said move was caused by traders consolidating all the recent polls and deciding that a Conservative majority was the most likely outcome.

The markets see that as ending the stalemate over Brexit.

However, Michael Brown, senior analyst at Caxton, said: "As we saw in 2017, polls can sharply narrow as we approach polling day.

Jane Foley from Rabobank said the pound's rise was mainly due to "technical reasons" after it went over the "psychological" $1.30 level.

The initial referendum result in 2016 sent the pound sharply lower against other currencies. Since then its value has tended to rise when a Brexit deal, particularly one maintaining closer ties with the EU, was in prospect.

“Contractors are being paid,” Ayeh-Paye