Motorola has revived its slim Razr flip phone, some 15 years after the original “game changing” device hit the market.

The new device features a 6.2in screen which folds together when closed, with another, smaller screen to display notifications on its outer shell.

The device will be sold for $1,500, starting in the US on 26 December, with other markets coming later.

Analysts told the BBC they did not expect the device to have much impact on the global smartphone sales.

“The question everyone will be asking is whether this foldable device will change Motorola fortunes, because their market share is extremely small,” said Francisco Jeronimo, an analyst with IDC. "Honestly, I don’t think it will."

But the new Razr is, at the very least, being seen as an innovative statement piece from Motorola, which is now a unit of Chinese giant Lenovo, having being acquired - from previous owner Google - in 2014. 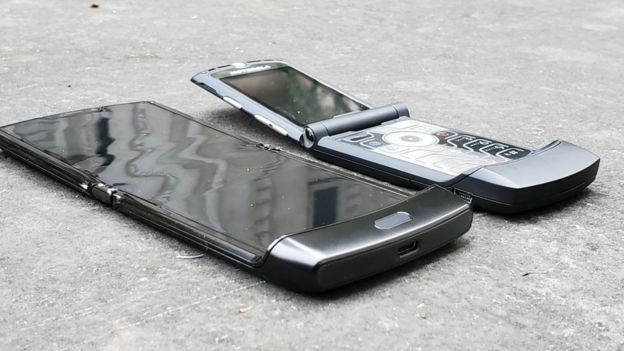 “In the current era of similar looking black rectangular phones with touch screens, the new Motorola Razr has the potential to bring some excitement back into the market,” said Ben Wood, from CCS Insight.

"I have little doubt that Lenovo will struggle to keep up with demand as soon as it is available to buy.”

Reports prior to the device’s launch suggested only 200,000 units would be available - but the company would not confirm this.

It will come to the UK in early 2020, and be exclusive to EE's network.

Motorola is describing its new Razr as an “impossible” feat of engineering, with a fold that closes flush against the other side. Samsung’s Galaxy Fold, by contrast, has a considerable gap between each screen when folded.

“With the new Razr we had to rethink how to engineer a phone,” said Glenn Schultz, the firm’s head of product development.

“Our zero-gap hinge allowed us to bring to market a device that folds completely in half. Many didn’t believe we could do it, but let me tell you, it's fun to work on something that everyone thinks is impossible.” 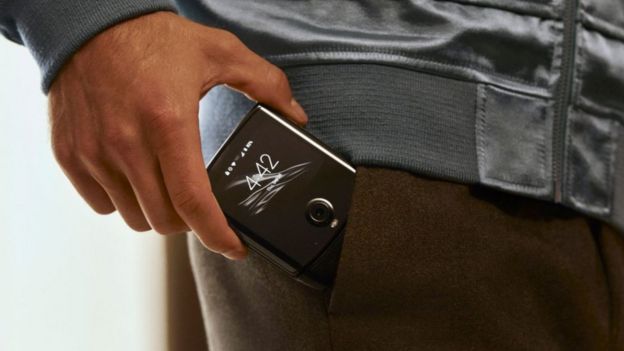 Motorola’s intent to release its first foldable device became apparent at the beginning of this year when the firm’s application for a patent was discovered by mobile phone news blog 91 Mobiles.

Reports had suggested the device would be released in the summer, but it suffered unspecified setbacks. That allowed other manufacturers, such as Samsung, to beat them to market. However, Samsung’s haste meant its Galaxy Fold device was besieged with problems, and the company has warned about the $2,000 device’s durability.

The firm said the new Razr was water resistant, though in an attempt to reassure consumers, Motorola said its screen could be replaced free of charge within 24 hours, while the product is still under warranty.

The new Razr will become the first flip phone - or “clam shell” - to make use of a foldable screen. When shut, the device has a thickness of 14mm. The original Razr was 13.9mm.

The outer screen - which the company refers to as the Quick View display - can be used to view notifications, reply to messages (using either a fixed response or a voice reply), take calls and make contactless payments.

At its developers’ conference in October, Samsung teased a similar vertically-folding phone on stage, but did not offer any specifics, saying it was simply “exploring” the idea. 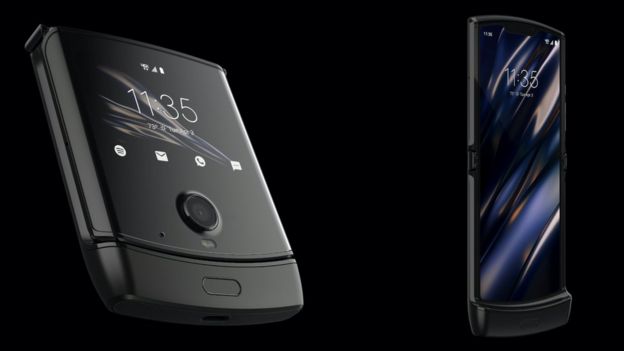 The Razr will initially be released in the US, ahead of other markets in 2020

The slow emergence of foldable devices presents an opening for the more minor players in the sector to release a breakthrough device, just as Motorola did in 2004 with its original Razr, famed for its slim build and metallic aesthetic.

It was unveiled to the world with the help of Paris Hilton and David Beckham, who were photographed extensively while holding up the device; side on so people could see how strikingly slim it was. 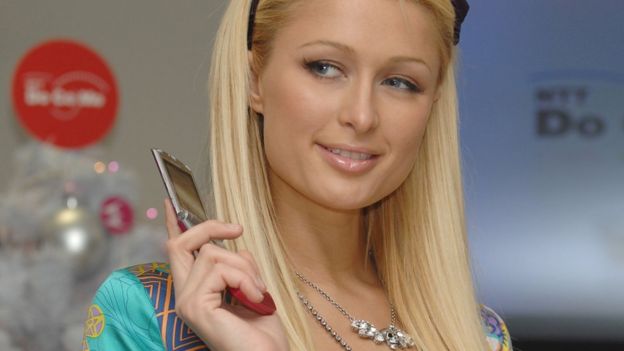 By creating arguably the first mobile device to successfully cross the bridge from tech into fashion, Motorola’s mobile devices business soared. By 2006, less than two years after Razr’s debut, Motorola was selling almost a quarter of the world’s mobile phones, second only to Finnish giant Nokia.

“It was a true fashion icon, initially in silver aircraft grade aluminium. Later there were a whole spectrum of colours, notably the highly successful pink Razr and also the memorable Dolce & Gabbana version - which at the time cost an eye-watering £400.”

Google Maps gets a COVID-19 layer