Cash and Digne were struck celebrating Villa's goal by Buendia

One fan was charged with assault and two fans were arrested after players were hit by objects in Premier League matches at the weekend.

Lucas Digne and Matty Cash were hit by a plastic bottle as they celebrated Aston Villa's winning goal at Everton.

Chelsea's Antonio Rudiger was hit by missiles thrown from the crowd in their 2-0 win over Spurs on Sunday.

There were reports of West Ham fans clashing with police

at Old Trafford - and a drone stopped play at Brentford.

as fans ran on to the pitch and appeared to be grappling with stewards and police in the stands.

After events at Goodison Park, Roger Tweedle, 19, of Cranehurst Road, Walton, was charged with assault and throwing an item on to the pitch.

He was released on conditional bail and will appear at South Sefton Magistrates Court on February 28, Merseyside Police said.

Separately, two men were arrested on suspicion of throwing objects from the stands by the Metropolitan Police.

Tuchel asks for respect for players

A Metropolitan Police statement said: "Enquiries, in conjunction with Chelsea and Tottenham Hotspur, are ongoing to identify anyone else involved in throwing objects during the match."

The match was briefly paused as the German defender, who was struck by a lighter, removed items that were aimed at him from the pitch.

Commenting on the incident, Tuchel said: "I sent the message to our fans - support us, we love to have them close to the pitch, we love a brilliant atmosphere and that they are not behind fences or nets.

"From there everybody needs to show respect. But in general I'm not concerned. Right now I enjoy the atmosphere.

"If this is a new trend we need to act together to make sure that it stops as soon as possible, to protect the fantastic environment and unique atmosphere of England."

Tuchel said he did not see when Rudiger was hit.

"I just heard it some minutes ago, I was actually not aware of all this during the match," added the German manager.

"I think it was during a corner or around the corner, but I have zero information on that."

Arrests at games on the rise

Figures released on Friday showed arrests at football matches across the top-five English leagues were at their highest levels in years, with fan disorder "getting worse" according to the UK's football policing lead.

The latest data covered the first half of this season - a period that saw the the return of fans to capacity stadiums after a year of lockdowns and restrictions.

There have been more than 800 football-related arrests in the first six months of the campaign, alongside more than 750 reported incidents of disorder.

In a statement after the Villa game, Everton said the club would ban "any fans identified throwing objects".

The bottle-throwing incident followed a similar scene at Elland Road at the beginning of January, when Burnley's Matt Lowton was struck by a bottle while celebrating a goal against Leeds.

"It just needs to be a lifetime ban for anybody caught doing it. It's dangerous," said former Republic of Ireland international Andy Reid on BBC Radio 5 Live.

"If it's a coin you could cause real damage. Or a full bottle with a lid on it, which they are not supposed to have in there anyway, you could really hurt someone." 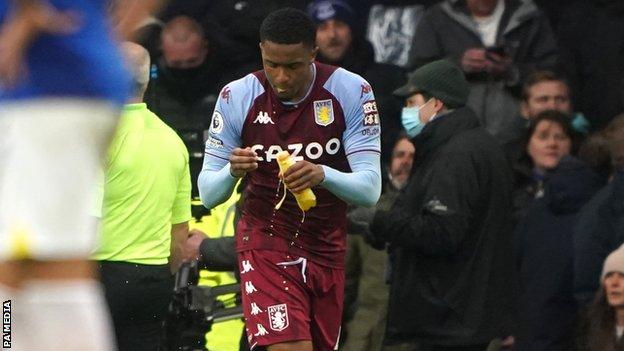 'We should be so proud'

Loughman 'should not have returned

Until Henry got the ball'

'Forget about the ones you miss'
Next Item