As England aim for back-to-back wins over France on Saturday at Exeter's Sandy Park, the hosts of the second of three autumn internationals hope it will be a showcase for their own ambitions for a top women's side.

Exeter have enterprising plans to join the Premier 15s - England's elite domestic women's league - next season, and Saturday's game is a chance to market the club to potential new players.

Exeter seems to have an appetite for all rugby right now - the men's team have reached the last four Premiership finals and have added Scotland star Stuart Hogg to their squad as they aim for success at home and in Europe.

Sandy Park hosted the Red Roses' 55-0 Six Nations win over Italy in March in front of 10,545 fans - a record for a non-World Cup women's England home game. The club hopes that is a strong signal that there will be a good market for a women's side playing under the Chiefs banner.

The RFU have opened up applications to play in the women's top flight for the next three years, with four spaces in the 10-team league available for change.

Exeter are spending £500,000 to set the team up and anticipate a further outlay of between £1m and £1.5m if the side is awarded a place in the new structure. 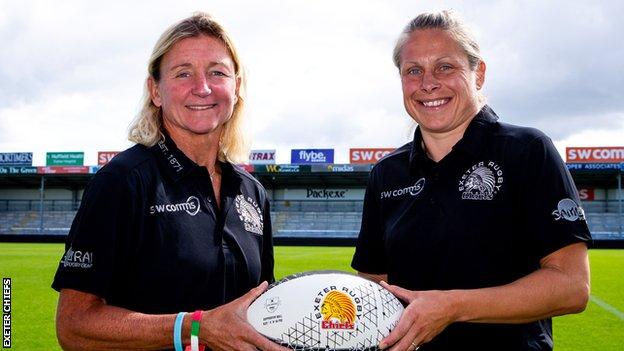 Former England players Amy Garnett (right) and Susie Appleby will coach Exeter's Premier 15s side, if they are awarded a licence by the RFU

"Behind the scenes we're just trying to build the best product we can here, and by building that best product that's going to bring the players in and attract them," added Garnett.

"We can get all the strength and conditioning in place, the analysis, the nutrition, skills sessions, that full-time programme that we're building towards, and hopefully that will attract the players.

"With the England game they get to see that and what other opportunities are available to them."

But Garnett and Exeter's ambitions are not simply just to have a women's team. They want to emulate the pathway on the men's side which has seen players including Henry Slade, Jack Nowell and Luke Cowan-Dickie progress from youngsters in the Chiefs set-up to World Cup finalists with England.

"We've got the rugby academy at Exeter College, and we've got probably one of the best programmes in the country at Exeter University," noted the former England hooker.

"I coach at the college, I coach at the university and we're looking to use that as a pathway going through; that's really important, it's what the Chiefs is all about.

"You see players like Jack Nowell and Luke Cowan-Dickie come through that system. That's exactly what we want to do, to bring that local product through and get them to pull on a Chiefs shirt and ideally pull on an international shirt."

NSA announces charges for use of A.S Stadium

England have tough day in tour match
Next Item