Belgian forward Mertens scored from the penalty spot after Liverpool defender Andy Robertson was judged to have fouled Jose Callejon.

Former Tottenham forward Llorente then capitalised on a mistake from Virgil van Dijk in stoppage-time to roll the ball past Liverpool keeper Adrian.

Jurgen Klopp's side are the first winners of the competition to lose the opening game of the following campaign since AC Milan in 1994.

Referee Felix Brych's decision to award a penalty for Napoli's opener stood after it was looked at by video assistant referee (VAR) officials.

"I'm pretty sure there are different views on that situation but when a player jumps before there is contact then it cannot be a penalty," said Klopp.

"It was very decisive in that moment for sure but we can't change it. As long as human beings make the decisions then there is still potential for [mistakes].

"The rules are like this and we trust in the rules."

Goalkeeper Adrian had earlier made two keys saves for Liverpool, who initially struggled to impose themselves in the intimidating atmosphere of the San Paolo Stadium.

The 32-year-old, deputising for the injured Alisson, twice saved from compatriot Fabian Ruiz during the first period and produced an outstanding point-blank save from Mertens' volley just after the break.

However, unlike the corresponding fixture last season, when Liverpool failed to register a shot on target in their 1-0 defeat, Klopp's side did produce moments of slick football to threaten the hosts.

A flashing Mohamed Salah drive was superbly tipped to safety by Napoli goalkeeper Alex Meret, who also saved Sadio Mane's toe-poked shot with the score at 0-0.

But while Klopp's side have made a blistering start to the Premier League, averaging three goals per game, their failure to exploit several good breaks consigned them to a sixth defeat away from home in their past eight matches in the competition.

Liverpool's failure to puncture the home defence was largely down to the impressive form of Kalidou Koulibaly.

The Senegal international repeatedly demonstrated why he was been mentioned in dispatches throughout the summer as a target of the Premier League's biggest clubs.

Named the best defender in Serie A last term, the 28-year-old made several key interceptions and dispossessed both Roberto Firmino and Salah in one-versus-one situations.

And he continued in that vein, patrolling behind left-back Mario Rui to snuff out the danger posed by the Egyptian's pace and trickery.

His reading of the game was exemplary throughout, ensuring he was rarely caught out of possession and was able to spring Napoli attacks.

Klopp's team lost all three away games in last season's group stage, but overwhelmed teams at Anfield with their pace and energy, and the brilliance of forwards Mane, Salah and Firmino.

Jordan Henderson's searching second-minute pass into the path of Salah seemed a precursor to the sort of dominant attacking display that has served Liverpool so well.

However, on a warm evening in Naples, Klopp's side appeared to take a more conservative approach exemplified by full-backs Robertson and Trent Alexander-Arnold's failure to press forward.

In midfield Fabinho snapped away but their was an absence of sparkle in possession, with Henderson and James Milner delivering solid displays but not the sort of service that Liverpool's attacking triumvirate are accustomed to.

Only goalkeeper Adrian touched the ball less than Salah and Firmino.

And that lack of involvement perhaps also contributed to Mane's indecision, when racing towards goal, with the Senegalese forward over-hitting a pass to Salah that could have put the Egyptian in. 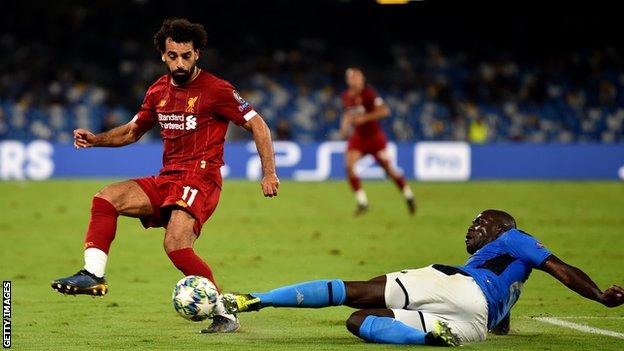 'It should hurt' - what they said

Liverpool boss Jurgen Klopp, speaking to BT Sport: "It should hurt because there were opportunities for us. It was an open game with a lot of counter-attacks, but we didn't finish them off and that is a problem.

"I don't think it's a penalty. What can I say? For me, it is clear and obvious no penalty. He jumps before any contact - we can't change that.

"We played a lot of good football but didn't finish it off. We controlled moments but had not enough chances in the end. We made decisions that were not right and have to accept the result. It was very often the final ball that was not right."

Napoli manager Carlo Ancelotti: "The strategy was to play a complete game. High pressure if possible, but also defending deeper if needed. We did everything well. We have to get used to the different moments of the game.

"When Liverpool were in control we did well in defending and then took our chances. It was a very balanced game. So we did well, because I consider them the best team in Europe."

Liverpool travel to Chelsea in the Premier League on Sunday, 22 September (16:30 BST) and do not play in the Champions League again until Wednesday, 2 October (20:00 BST) when they host RB Salzburg at Anfield.

England to face Portugal in friendly
Next Item