Four of Asia's five representatives started the final phase of preparations for the 2018 World Cup this week with friendlies against a variety of opponents.

ESPNFC looks at the big lessons that emerged from the respective games.

Saudi Arabia may not need a striker

On the face of it, the lowest-ranked team in the tournament (67) have a mountain to climb at their first World Cup since 2006 and Group A games against hosts Russia, Uruguay and Egypt.

Saudi Arabia can however take plenty of positives from a 2-1 defeat at the hands of Italy on Monday.

One was that the much-lamented lack of a goalscorer may not be a huge problem. In the first half, Mohannad Aseri was up front and the long balls that initially came from deep in the direction of the Al-Ahli target man were no problem for the Italian defence.

Matters improved after the break with the introduction of widemen Salem Al-Dawsari and Fahad Al-Muwallad. It meant that the Saudi frontline had no recognised striker but it suddenly had mobility, fluency, pace and, most vitally, the ability to trouble the Italy defence. Saudi Arabia pulled a goal back and could also have levelled.

The Riyadh media was impressed. Coach Juan Antonio Pizzi may not have had much time in charge but the team has certainly shown some improvements since the Argentine arrived in November. Scouts working for Uruguay, Egypt and Russia will have left the Swiss stadium with plenty to think about.

Akira Nishino's first game as Japan coach since being appointed in April did not go well with a 2-0 loss to Ghana on a wet night in Yokohama -- the reaction of the fans at the final whistle demonstrated that.

His decision to play with three at the back is not unheard of in the J.League, even if it has been rare with the national team in recent years. A lack of defensive cohesion played a part in both goals and it was no surprise that the switch was made back to the more familiar four-man backline during the second half.

It would have been less of an issue had things been different going forward. The big names -- Keisuke Honda, Shinji Kagawa and Shinji Okazaki all made an appearance but were unable to cause many problems -- and Japan slipped into a predictable pattern of pretty passing but with little penetration and no end product.

It all ended in a fourth successive defeat for the Samurai Blue with time running out before the opening game of Group H against Colombia.

South Korea defeated Honduras 2-0 in Daegu and it was as comfortable a 2-0 victory as you will ever see. The Central Americans almost made it to the World Cup but rarely travelled across the halfway line in Daegu. As a result, the game didn't give coach Shin Tae-yong much of an idea of how his side will fare at the World Cup, where they will face Sweden, Mexico and Germany. 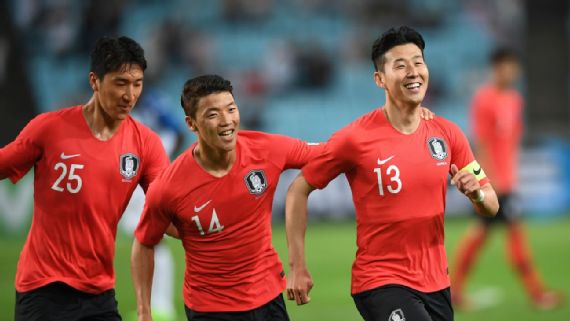 Most of the players looked pretty good because they were allowed to. Lee Seung-woo impressed on his debut, working hard and aggressively behind the strikers, while Moon Seon-min netted 16 minutes after coming on. The much-maligned defence looked solid but then wasn't really tested.

It is to be hoped that Bosnia and Herzegovina ask a few more questions of the Taegeuk Warriors on Friday, otherwise coach Shin is going to be none the wiser when he considers his final squad of 23 this weekend.

Iran fans will be having panic attacks after a 2-1 defeat at the hands of Turkey, as they have not had to deal with many setbacks in recent years. In Istanbul the defence looked nothing like the machine that powered Team Melli through qualification in the smoothest of fashion.

Losing friendlies in the run up to the World Cup is nothing to get too excited about -- with the focus very much on preparing for Group B and Morocco, Portugal and Spain -- but while Iran had plenty of possession against Turkey, they were caught by a couple of sucker punches.

Coach Carlos Queiroz surprised everyone in Iran by leaving veteran centre-back Seyed Jalal Hosseini on the standby list for the plane to Russia. Against Turkey, replacement Rouzbeh Cheshmi struggled, though he did not get as much protection from midfield as he would have liked. The experience and calming presence that the 36 year-old has on the rest of the team may just well come in handy in Russia.

All Blacks gain revenge over Argentina

Livingston: How do you replace Gary Holt?