From the cries of curlews sweeping the Scottish skies to the crunching crashes of a Cornish scrapyard, Paul Cheese has heard it all. He spent his summer recording a song made up of the sounds of the UK.

The clickety-clack of skateboards in Newcastle.

The bass-like throb of a barge chugging beneath Birmingham's canal bridges.

The thumping of flags buffeted by winds in Hartlepool.

These are just some of the thousands of noises that Mr Cheese encountered while creating The Big Record. 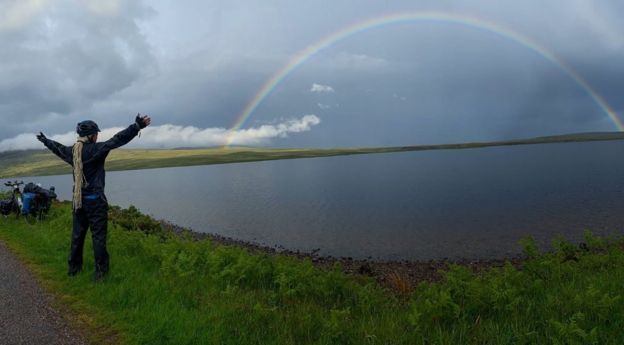 Mr Cheese enjoyed a colourful journey around the UK

On 26 May, armed only with overnight supplies and 48kg of recording equipment, he set out on his bicycle from his home in Folkestone.

Staying overnight at hotels, hostels and with friends, the 44-year-old worked his way west to Wales then north to Northern Ireland and Scotland, before zigzagging down to the Channel Islands. 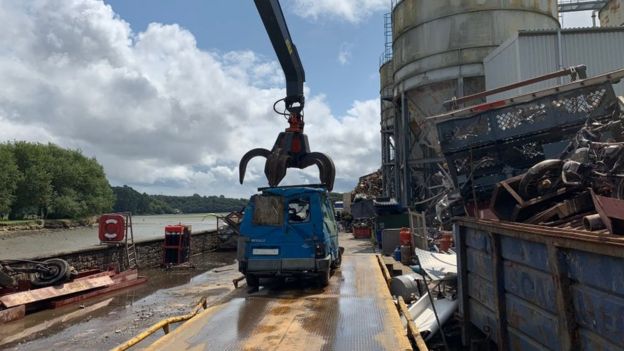 The sound of a vehicle scrapyard in Truro was "audio gold"

"I quickly found it was better not to have a plan," he says, adding: "I just went where people told me."

He appeared on BBC radio stations across the country to ask for suggestions of sounds he should record, and followed the advice of people he met on his journey.

"I did a 450-mile detour in Scotland because someone suggested I record the sounds of the birds on the beaches of Sutherland," he says. 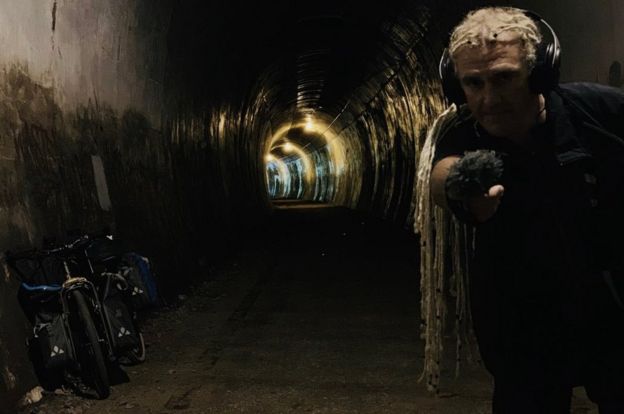 He recorded parts of his track in old railway tunnels 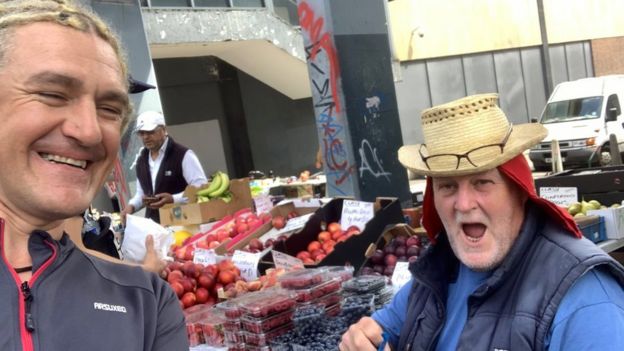 The cries of a greengrocer in Sheffield proved particularly fruitful

"I was cycling in Cambridge and saw a man with a metal walking stick that made a brilliant 'kerchunk-click' noise as he walked.

"Next to him was his wife in a wheelchair, and she had a pebble caught in her wheel which made a 'blipple blipple' noise.

"The two of them together was extraordinary." 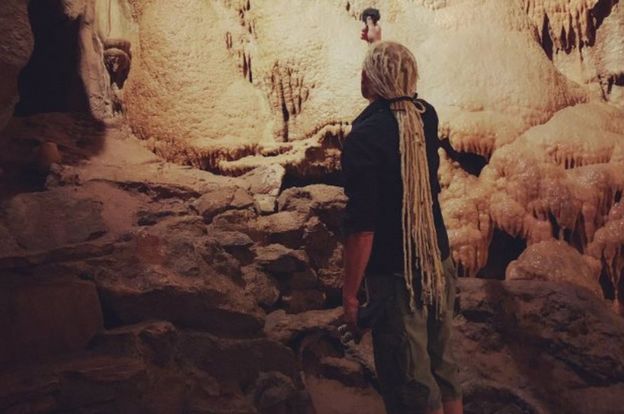 At the end of a long day's riding and recording in Suffolk, Mr Cheese chanced upon a fire station where firefighters were performing drills.

A short introduction later and their chief was playing him the various sirens from the service's engine. 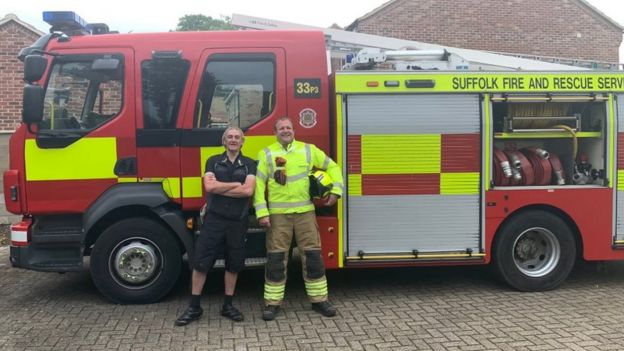 Firefighters in Suffolk let him record their drill and sirens

Operators of an indoor snow centre let him get up close to the sound of skiers slashing down the slope and the grinding gears of the lift returning them to the top.

There were barking dogs in Birmingham and litter-pickers in Stourbridge; the soothing sway of a barley field in Shropshire; the buzz of electricity pylons, and the echoes of claps in old railway tunnels. 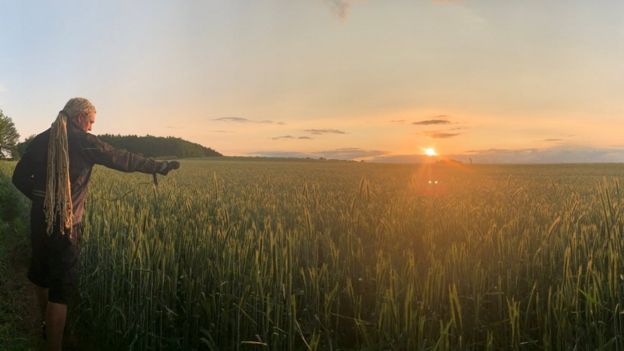 If a recording opportunity cropped up, Mr Cheese was ready to capture the moment

Mr Cheese has also been sent hundreds of sounds by the public, from hissing swans to thwacking bin lids and the whining swoop of Spitfires.

All of his sounds have been meshed together, musically entwined into a four-and-a half-minute song of the UK. 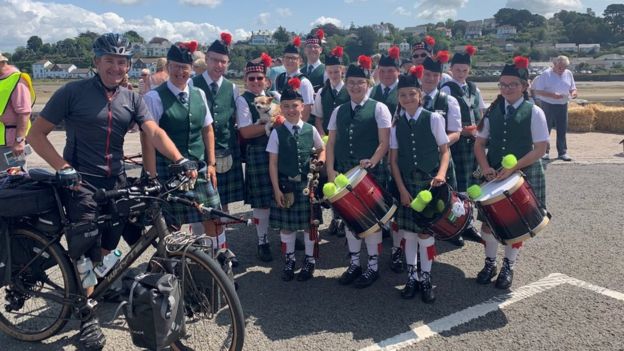 "Everybody say cheese!" The Bideford Pipe Band poses for a photo

The idea started two years ago when he went on a BBC Radio Kent show to ask listeners for the noises of their lives.

Mr Cheese noticed an intriguing pattern in the sounds he was sent. 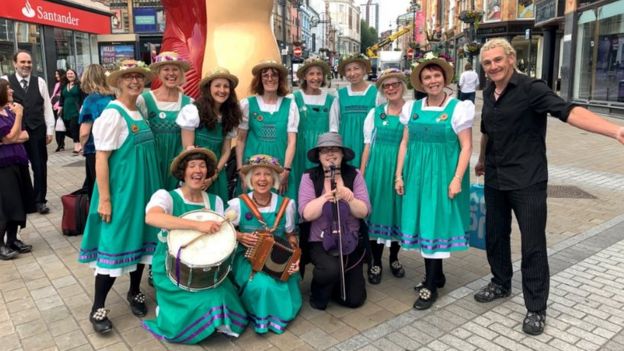 He met and recorded all kinds of folk

"It was like music and made me think, 'what would a song of the country sound like?'"

The result is an orchestra with the bass part provided by electricity substations and diesel engines, a string section comprising dozens of lawnmowers and strimmers and a literal wind section made up of a storm on Bodmin Moor and the whirring buzz of barbed wire fences. 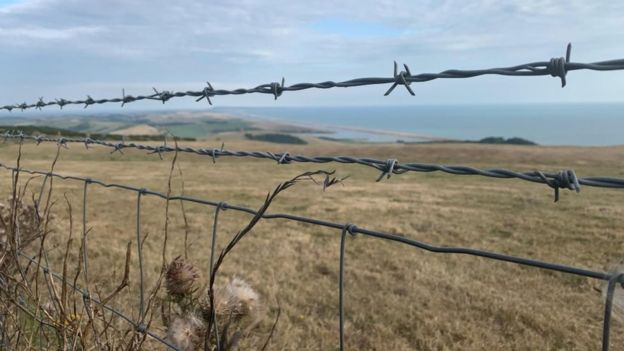 The choir is provided by birds, from skylarks in Manchester to the "especially loud sparrows" of Jersey and Norfolk.

"The sound I heard the most was the blackbirds," he says.

"They serenaded me around the country.

"It's a cliché but on an evening after rain, the sound of the blackbirds is just phenomenal and it is in all corners of the country." 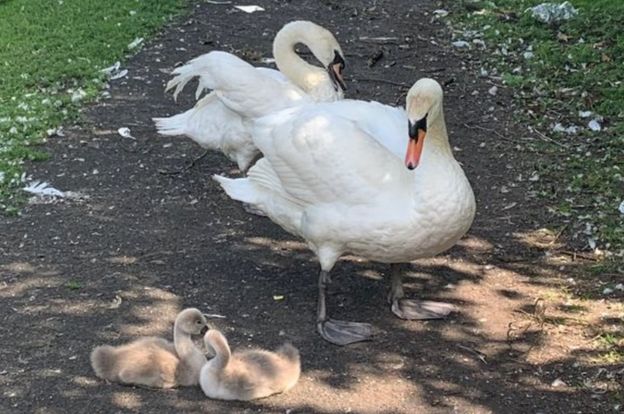 He encountered all sorts of wildlife

Of course Mr Cheese also got to see the country as well as hear it, and he says he has a new appreciation for the UK.

Buttermere in the Lake District is "just wow, what a place", while the canals of Stoke-on-Trent are somewhere "I definitely want to go back to".

The whole of England's north-east coast was bristling with beauty and people who "invite you for a chat". 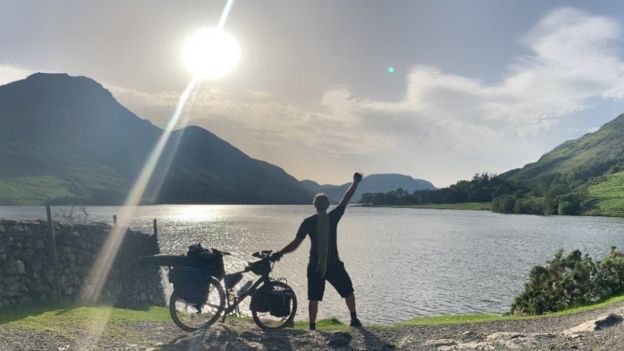 "There was nowhere I didn't like," the cycling musician says.

"I'm not just being diplomatic; everywhere has its own quirks and peculiarities and everywhere I went led me to the next place - a stepping stone into the next location - so you could not have one without the other."

He started to record voices too and now has an archive of almost 160 regional accents. 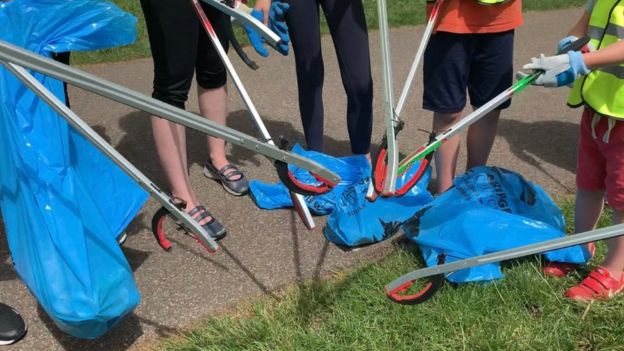 The sound of litterpickers in Stourbridge was anything but rubbish

Hearing the voices and sounds transports him back in his mind to the places he captured them.

"I have got an audio-graphic memory of the UK now," Mr Cheese says.

"It could drive you a bit crazy, but when you are on your bike out on a long ride you have a lot of time to think things through." 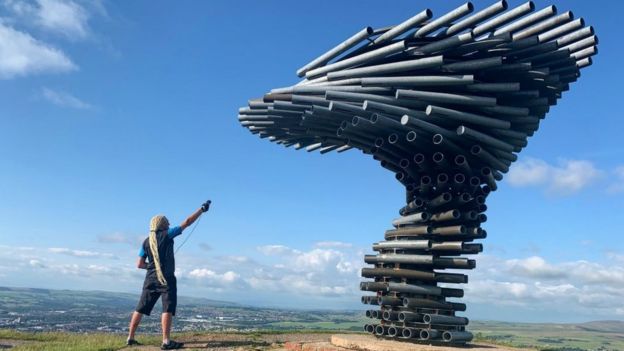 The Singing Ringing Tree near Burnley was another stopping point

Mr Cheese has made his song available for everyone to hear online and also hopes to have it played on BBC local radio stations.

"It's been fantastic chatting and meeting people and hearing all their ideas," he says.

"This is a piece of music created by the sounds suggested by the people so, really, everyone should hear it."

Elvis's grandson took his own life

The mobilizing power of the BTS Army