What has Donald Trump actually achieved on trade?

What deals has Donald Trump managed to do?

Is Donald Trump anything more than, as he once put it, "Tariff Man"?

The US president uses the tool against trading partners to fight battles from "unfair" steel price practices to France's digital tax on tech giants.

Most prominent has been his trade war with China which has raised border taxes on almost $500bn of annual trade.

Mr Trump styles himself as a deal-maker who, as president of the world's largest economy, uses tariffs for leverage in negotiations.

So can the US president legitimately claim he has made any progress? The BBC takes a look around the world.

When Mr Trump first announced a trade deal with China, he hailed it as "very large and comprehensive".

It was, he tweeted, "by far, the greatest and biggest deal ever made for our Great Patriot Farmers in the history of our Country".

This week, the two sides finally got around to a signing a deal but some were far from convinced that the substance merited Mr Trump's descriptions. 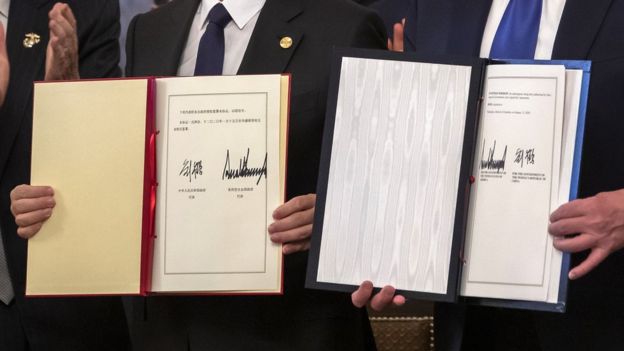 Most of the tariffs remain in place. The US will maintain levies of up to 25% on an estimated $360bn worth of Chinese goods while China is expected to keep tariffs on more than $100bn of US imports.

Even the Trump administration conceded it fell short of original goals, describing it as a "phase one" agreement.

In 2018, the US, Canada and Mexico agreed to a deal that will govern the more than $1.1 trillion in trade between the three countries.

The pact, which has been slowly making its way through the legislatures of the three countries, will replace the 1994 North American Free Trade Agreement (NAFTA) which Mr Trump has described as the "worst".

However, despite a name change, a lot of the terms remain the same. 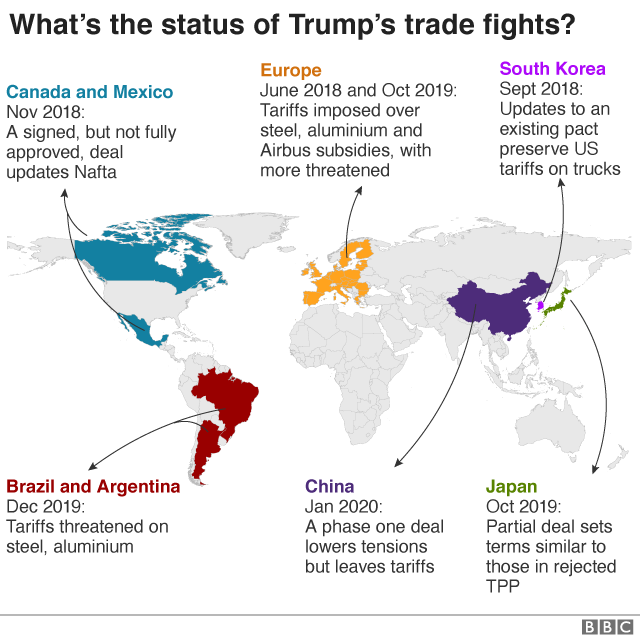 There are some differences, including stronger labour provisions and tougher rules on the sourcing of auto parts.

But analysts say their significance remains to be seen. Many of the other updates were worked out in negotiations that pre-dated Mr Trump.

One of Mr Trump's first moves as president was to withdraw the US from the Trans Pacific Partnership - a proposed 12-country deal that eventually went ahead without America, putting its exports at a disadvantage.

Mr Trump has since claimed two bilateral agreements in Asia, with Japan and South Korea, but the changes were so limited that Congressional researchers said they barely qualified as trade deals.

In the case of South Korea, the most notable provision actually preserved US tariffs on light duty trucks.

With Japan, the US won either levy cuts or complete elimination on $7bn worth of agricultural goods. But this was the same access America would have received under the Trans Pacific Partnership.

In the case of Europe, there is no trade deal in sight.

The two sides went through a round of tit-for-tat tariffs after the US announced the steel and aluminium tariffs - measures that affect more than $10bn worth of two-way trade.

Then, in October, the US imposed 25% tariffs on $7.5bn worth of European goods, including Scotch whisky, French wine and Italian cheese. 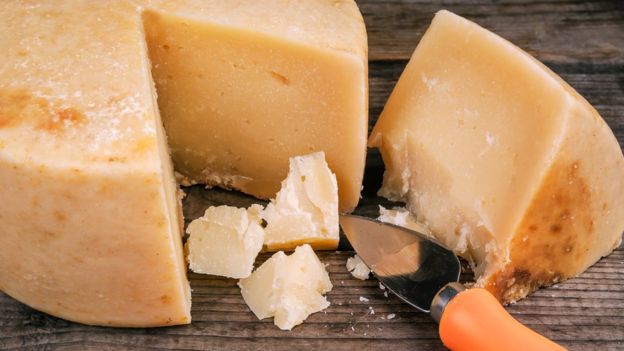 Pecorino, from Italy, is one of the cheeses affected

In that instance, Mr Trump's decision had the approval of the World Trade Organization, which had found that the European Union provided illegal subsidies to aircraft manufacturer Airbus.

The US president had made repeated threats to impose tariffs on European cars but that has never materialised.

However, the White House continues to dangle the prospect of steep levies on other EU goods such as French produce in retaliation for France's new digital services tax..

Heads spun last month when Mr Trump announced on Twitter he wanted tariffs on steel and aluminium from Brazil and Argentina.

Those countries had been exempted from higher duty on both metals but Mr Trump claimed the two nations had been devaluing their currencies "which is not good for our farmers".

So far, there has been no follow-up announcement from his administration and the threats have not materialised.

Following a phone call with Mr Trump, Brazilian President Jair Bolsonaro said he had been assured they would not happen.

Bold attempt to save the economy

The metal more precious than gold
Previous Item
NEXT

Oil rises as Libyan oilfields shut down
Next Item