Why Nigeria has restricted food imports

President Muhammadu Buhari has directed the Central Bank of Nigeria to block food importers' requests for foreign currency in a bid to boost local agriculture in Africa's most populous country.

It is a continuation of a policy that the president began after coming to office in 2015, when he banned the use of foreign exchange to import dozens of items including the staple food, rice.

Since then, domestic rice production has increased, but the policy has been criticised for not taking the low capacity of local farmers into consideration. The policy has also coincided with a rise in food prices, which has been blamed on insecurity in some of the country's main food producing areas.

How much is Nigeria spending on importing food?

According to data from Nigeria's National Bureau of Statistics (NBS), the amount of money the country has been spending on importing food and drink increased from 2015 to 2017, dipped in 2018 and if the trend from the first quarter of this year continues, the bill will go up again for this year. 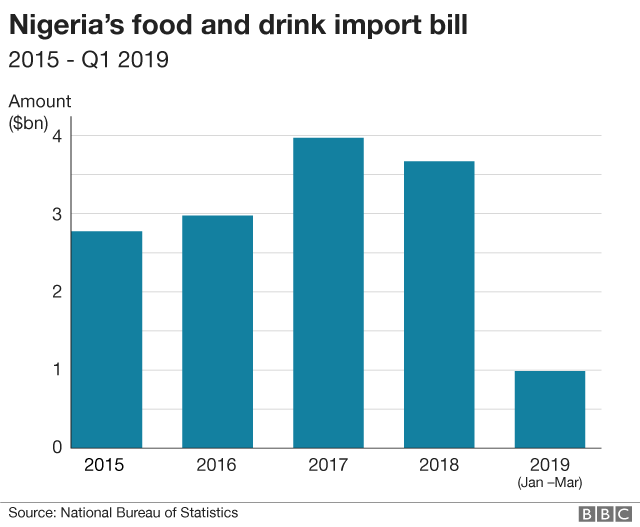 But the data picture is confusing as leading figures have quoted other figures.

But in September 2018, the agriculture minister at the time, Audu Ogbeh, said Nigeria spent $22bn importing food every year.

Which foods are imported?

Nigeria does produce the basic food commodities such as sugar, wheat flour, fish, milk, palm oil, pork, beef and poultry but up to now domestic farmers have not been able to satisfy demand of the country's 200 million people, hence the need for imports. With the foreign exchange ban Nigerian farmers will now have to increase production.

Official figures show that domestic rice production has gone up since 2015. 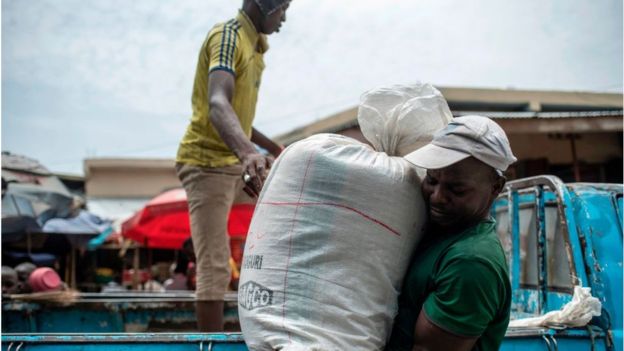 Rice production has increased but farmers cannot meet all the demand

According to figures from the UN's Food and Agriculture Organization, rice production has increased from an annual average of 7.1 million tonnes between 2013 and 2017 to 8.9 million tonnes in 2018.

However, there are also reports that rice smuggling has increased - as customs officials continue to seize large quantities of the grain at the borders. This suggests that Nigerian rice farmers are still not producing enough.

Many experts believe that the policy of restricting food imports does have some merits, but the policy cannot be introduced in isolation.

Agricultural economist Idris Ayinde argues that restricting food imports should be a gradual process since the country cannot yet meet domestic demand for most food commodities, and the policy risks increasing food price inflation further.

Local rice production has increased, but the foreign exchange ban was coupled with policies aimed at supporting farmers through subsidies and loans.

For instance, last November, the government spent $165m subsidising rice production. Despite this, people continue to buy rice that has been smuggled into the country. 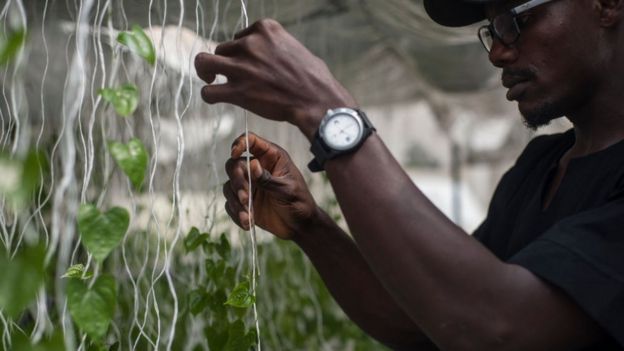 Attempts to boost local production of palm oil have also been hit by smuggling. Foreign exchange to import palm oil was also restricted in 2015, but local producers have not been able to fill the gap.

The government now hopes that investing up to $500m in the industry can boost production from 600,000 tonnes a year to five million tonnes.

In addition to questions over local capacity, there is also a concern that the government's policy threatens the independence of the central bank. Former deputy governor of the bank Kingsley Moghalu said the president's directive contradicts the law, adding that the central bank's economic policy should not be "imposed by a political authority".

Could prices go up?

Economic theory suggests that reducing the supply of something will increase the price. There is a general belief therefore that if domestic supply cannot immediately replace what was once imported, Nigerians will end up paying more for their food.

The agricultural sector, which remains a major employer, has suffered years of neglect as Nigeria has spent decades relying on oil to provide much-needed foreign exchange and government revenue.

There may be lots of people working on farms but a lack of investment has led to low productivity. In addition, not all available agricultural land is being used. It is estimated that just over a third of available land is being cultivated.

But following a big drop in the oil price five years ago, the country has renewed its interest in agriculture. If this enthusiasm can be converted into greater investment then the country should be able to produce more food.

Gov't is committed to youth entrepreneurship

Govt is committed to youth entrepreneurship