President Nana Addo Dankwa Akufo-Addo has said to stop climate change, world leaders must put aside the “unnecessary arguments” and rather channel their energies and resources into what can be done to counteract climate change and its devastating effect, especially in Africa.

“It is in our own interest to fight climate change decisively. A recent report of an inter-governmental panel on climate change concludes that the global community has
only 12 years to stop climate change,” he said.

The President, who was speaking at an Africa 2019 Climate Chance Summit in Accra yesterday, said reducing the effects of climate change required dealing with the phenomenon more aggressively than the world had done in the past.

Among participants at the international summit were climate change activists from around the world and members of the Conference of the Covenant of Mayors in sub-Saharan Africa.

It was organised by the Climate Chance Association and the Ministry of Local Government and Rural Development on the theme: “Stepping up local climate action in Africa”.

President Akufo-Addo, who is the co-Chair of the UN Group of Eminent Advocates for the 2030 UN Sustainable Development Goals (SDGs), said climate change was not only the biggest threat to the realisation of the SDGs but also having an impact on survival.

He said because of Africa’s weak economies, it was most susceptible to the effects of climate change, while its capacity to withstand the damage was also low.

He, therefore, urged both the citizenry and leaders on the continent to lead the charge in reversing the trend.

He said the negative effects of climate change were already being experienced in Africa through prolonged and intense droughts in eastern Africa, unprecedented floods in western Africa, the depletion of rainforests along the Equator, increasing ocean acidity around Africa’s southern coast and vastly altered weather conditions and patterns that were threatening agricultural productivity, food security, health, water and energy security on the continent.

The President called on local governments and non-state actors to lead the way in implementing interventions to mitigate the effects of climate change in their respective countries. 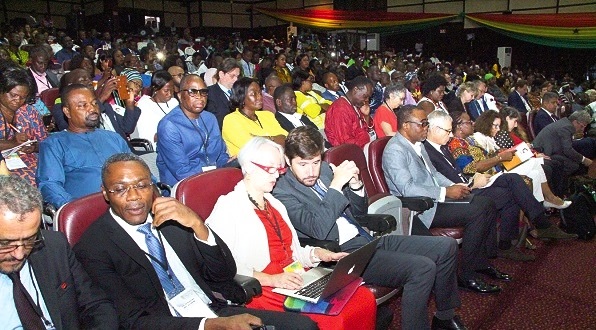 Ghana, President Akufo-Addo said, had taken a decision to increase the renewable energy component of its energy mix to 10 per cent, up from one per cent, by 2020.

He said as part of the measures, the government was to distribute and install 200 megawatts (MW) of solar panels in residential and non-residential facilities and state agencies by 2030 in order to reduce the country’s dependence on power generated from fossil fuel and other unclean and non-renewable sources.

He said the Jubilee House, the seat of the Presidency, would soon be powered by solar energy as an example to other institutions and public buildings, while a policy on electric mobility had been proposed in the 2019 Budget.

The President also said aside from banning illegal mining, about 20,000 young people had been engaged to help restore degraded lands, saying that so far they had planted trees to cover 190,000 hectares of land.

Former President John A. Kufuor, who chaired the summit, recounted his role in mobilising world leaders to attend the Paris Climate Change Conference which enacted the Paris Accord.

He said despite his hope that world leaders, especially those in developed countries, would enforce the tenets of the accord by now, “that has not been done”.

“If we wait for the big people at the top to act and they are not acting and the issue overwhelms our planet, no one is going to be immune or escape,” the former President added.

He commended President Akufo-Addo and the government for the interest shown in climate change matters and for the decision to host the conference in Ghana.

Deployment of troops not to intimidate