The 67-year-old denies five charges, including rape and sexual assault

The trial of ex-movie mogul Harvey Weinstein has begun in earnest in New York with graphic prosecution statements on his alleged crimes.

Prosecutor Meghan Hast said he was a "seasoned" sexual predator with vulnerable actresses as his prey.

His defence team said his actions were consensual, including in one "loving" relationship.

He could face life behind bars if convicted.

The trial is expected to conclude in early March.

Mr Weinstein arrived at the Manhattan court flanked by several members of his team. When asked by a reporter if he could get a fair trial, he replied: "Of course."

Once one of Hollywood's most decorated and lauded producers, Mr Weinstein has been accused of sexual misconduct by more than 80 women - allegations which helped drive the #MeToo movement.

But few of the complaints have led to criminal charges.

Last week, a judge told potential jurors that they must decide Mr Weinstein's case based on the evidence and not make it "a referendum on the #MeToo movement".

What were the prosecution's opening arguments?

Ms Hast, the Manhattan assistant district attorney, said: "The man seated right there was not just a titan in Hollywood, he was a rapist."

She said the defendant had used "his power and prestige in the entertainment industry to ensure [accusers'] silence... Although they're strangers to one another, they'll each describe to you their shame and humiliation following their violent encounters with the defendant." 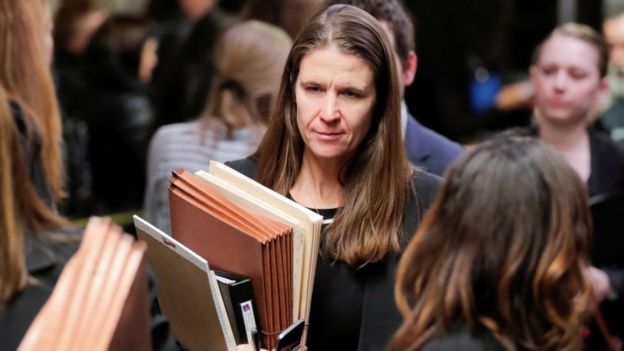 Ms Hast gave explicit details of allegations by three women, only two of whom are on the charge sheet. The third is actress Annabella Sciorra. Her alleged incident occurred too long ago to be prosecuted under New York state law, but prosecutors filed the indictment because it would allow them to call her as a witness during the trial.

Mimi (Miriam) Haleyi. A former production assistant who accuses Mr Weinstein of performing a forcible sex act on her in 2006. Ms Hast said Mr Weinstein had tempted Ms Haleyi with job opportunities and after having had her brought to his apartment, lunged at her, pushed her on to a bed and forced her into the sex act, leaving her "motionless like a dead fish".

Jessica Mann. An actress named for the first time. Ms Hast said Ms Mann had had encounters with Mr Weinstein over a number of years, and would testify that Mr Weinstein had raped her multiple times, once leaving her like a "rag doll" in her hotel room in March 2013.

Annabella Sciorra. Ms Hast said the actress would testify that she had been "violently raped" by the defendant in the winter of 1993-94, leaving her "emotionally and physically destroyed".

Ms Hast said the defendant had kept his alleged victims close so they would not report his actions.

What did the defence say?

The defence team said Mr Weinstein had only engaged in consensual relationships with his accusers.

One of them called Mr Weinstein "her casual boyfriend" and the relationship was loving, the defence said.

Defence attorney Damon Cheronis said an email from Ms Mann in 2017 read: "I love you, I always do. But I hate feeling like a booty call."

He added: "You will see the case unravel for the state, and it must, based on the evidence."

Mr Weinstein has admitted that he has "caused a lot of pain", but maintains he is innocent of any crimes.

The defendant, who shook his head and took notes at times on Wednesday, is unlikely to testify.

How did the criminal charges come about?

They stem back to May 2018, when Mr Weinstein turned himself in to New York police after some of the allegations received wide publicity. He was then charged with rape and several other counts of sexual abuse against two women.

He was released on $1m (£760,000) bail the following month and pleaded not guilty to rape and sexual assault in the New York Supreme Court.

There were originally six charges, but in October that year a New York judge dismissed one of them after prosecutors said one of his accusers had given a witness a different account of the alleged sex assault from the version she had given them.

Mr Weinstein unsuccessfully tried to get the trial moved out of New York City, arguing that the intense media scrutiny would make it hard for him to get a fair hearing.

Brits 2020: The real winners and losers

Capaldi expected to triumph at Brits

Adele to release album in Sept

Kofi B's funeral to be held on April 25

The young talented contenders at the Grammys
Next Item