A Danny Armstrong double handed Kilmarnock victory over St Johnstone despite the threat of a late comeback in the Scottish Premiership.

The winger's 30-yard free-kick gave Derek McInnes' side an early lead before his second, a minute into the second half, put the hosts in firm control.

Theo Bair's late half-volley set up a tense finish at Rugby Park, but it wouldn't be enough for Callum Davidson's side who were in search of their second win in a row.

Armstrong's brace instead secured only a second victory of the season for the Rugby Park outfit, a result which brings Kilmarnock to within three points of their opponents in ninth.

Kilmarnock let their intentions be known early on when Blair Alston got on the end of Armstrong's knock down, but the midfielder could only blaze wide against his former side.

It wasn't long before the hosts struck, though. It was a Hollywood hit, bent with unbelievable precision from distance by Armstrong to leave Remi Matthews with no chance.

St Johnstone weren't far away from an equaliser. Stevie May, superb at the weekend, saw a shot deflect and loop towards Zach Hemming before Ali Crawford and Nicky Clark forced the Killie keeper into good saves.

But the visitors were left to lament their profligacy when Kilmarnock struck immediately after the break.

Alan Power's shot trundled through to Chris Stokes, who rattled the bar from close range. The ball bounced back to the six-yard line where Armstrong threw himself forward to nod home in front of any clearing St Johnstone defender.

The wizard on the wing almost scored a sublime hat-trick on the hour mark. Receiving on the right-hand touchline, he danced past two players on his way to the edge of the box before curling a delicious strike that shaved the outside of the post.

Player of the Match - Danny Armstrong 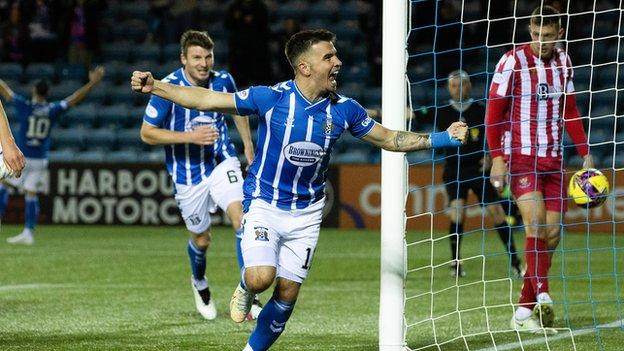 The former Wolves man now has five goals this season, showing his strikers how it should be done.

For the last few weeks, and possibly months, Kilmarnock have been crying out for a creator to provide the strikers with chances.

Armstrong appears the likeliest candidate to do so, but tonight he was more interested in taking the spotlight himself.

A free-kick that Trent Alexander-Arnold would have been proud of, and a poacher's finish to put most strikers to shame.

St Johnstone did threaten occasionally, but as the game went on that lack of confidence crept back in to their play.

Bair's late strike was truly out of the blue, but opening his Saints account will give him, and his manager, a boost.

St Johnstone boss Callum Davidson: "It was a horrendous start [to the second-half] from us, really poor. We didn't do the basics well, we had chances to clear our lines. Kilmarnock score and then sat in and defended well.

"We didn't ask enough questions of them and that was the thing that disappointed me most tonight. When you're chasing a game, you need to be brave."

Caicedo made 'mistake' asking to leave

Spurs see off to reach FA Cup 5th round

Michael Obafemi in action for Swansea

Tete after end of Lyon loan

Gordon signs for Newcastle from Everton

Fiorentina lacking goals as they face Hearts
Previous Item
NEXT

Postecoglou wants more from callow side
Next Item