Ghana has been ranked the seventh wealthiest country in Africa with a total wealth of 63 billion dollars (US$bn 63) as of December 2017.

The figures were contained in The AfrAsia Bank Africa Wealth Report 2018 published in September. The report covers wealth, luxury, prime property and wealth management trends in Africa from 2007 to 2017, with projections to 2027.

Ghana's capital city Accra also maintained its 2017 ranking as the 10th wealthiest African city with a current total wealth of US$38 billion in the report. "Major sectors in the city include basic materials, manufacturing and financial services," the report said. 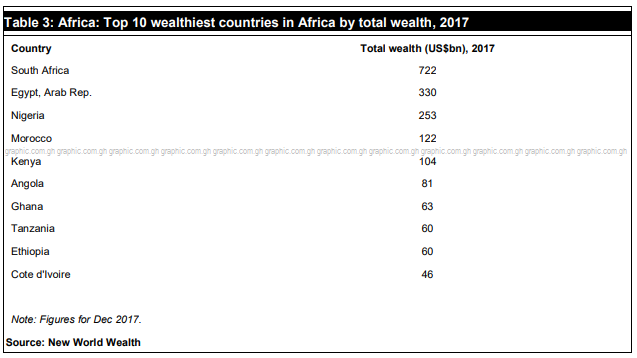 The report defines total wealth as private wealth held by all the individuals living in each country. It includes all their assets such as property, cash, equities and business interests less any liabilities.

South Africa (1st), Egypt (2nd), Nigeria and Morocco (3rd) were ranked the top three wealthiest nations on the resource-rich African continent with US$722 Billion, US$330 Billion, US$253 Billion and US$122 Billion respectively. 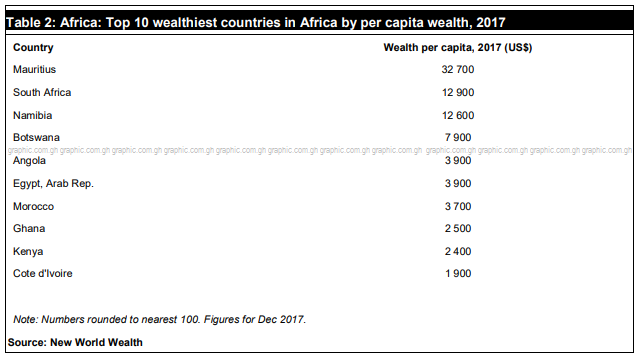 The report projected that the total private wealth in the continent will rise by 34 per cent over the next 10 years, reaching US$3.1 trillion by the end of 2027.

“We expect Mauritius, Ghana, Rwanda and Uganda to be the strongest performing wealth markets in Africa during this period,” reads the report.

The AfrAsia Bank Africa Wealth Report 2018 provides insights gathered by, New World Wealth, on wealth trends in Africa over the past 10 years, with projections for the next 10 years. The report also provides comprehensive wealth breakdowns for 17 African countries and 23 African cities.

Total individual wealth held in Africa currently amounts to around US$2.3 trillion. This figure is expected to rise by 34% over the next 10 years, reaching US$3.1 trillion by the end of 2027. The likes of Mauritius, Ghana, Rwanda and Uganda are expected to be the strongest performing wealth markets in Africa during this period (90% to 150% growth rates).

WHO donates PPEs to MOH

Gov't to test all persons exposed to COVID-19

All financial institutions to serve public

How social distancing can beat COVID-19